Review of Never Leaves You Album by Ralf GUM

German DJ/Producer Ralf GUM releases his second album 'Never Leaves You' on his own label GOGO Music. He has been producing music since 1993 and setting up his label in 2001 has enabled GUM to contribute to the scene for some time and he has certainly gained continuing recognition in the scene. It's clear when listening to his eagerly anticipated second album that Ralf's style has passion and love for house music and maintains an integrity that is to be respected. Currently residing in South Africa, Ralf Gum is one of the hottest acts to be working there right now. 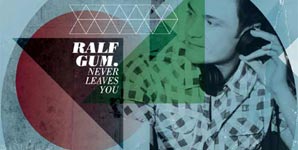 'Never Leaves You' is certainly a refreshing album that has definite sophistication and cool song structures to make it classy. There are some excellent tracks like 'Linda' featuring Oluhle and 'Take Me To My Love' featuring Monique Bingham. Other great vocal tracks on the album feature the legendary Caron Wheeler and some nice projections from Kenny Bobien. It's clear from the production that Ralf GUM truly must have been inspired to have such an excellent range of vocalists to give the album a really soulful feel that has definitely added to the energy and groove of the album. In fact, this is one of the few dance albums that really sells itself as an album rather than just a collection of tracks.

I have to hand it to Ralf GUM; he has really created a classy second album. 'Never Leaves You' truly brings the dance floor energy to you and allows for some soulful reflection too. As far as I'm concerned, that's a winning combination and for me confirms Ralf GUM as a sophisticated artist bringing some quality to the scene. There's something for everyone on this album if you're into groove, soul and funky house and definitely if you're into good vibrations. Good effort!