If you're a Smurf you're meant to spend your days in Smurf village contributing to the town in any way you can. Papa Smurf sees over the town folk and keeps an eye on some of the younger Smurfs who are not so keen to settle into their traditional way of life.

One of those said Smurfs is Smurfette, she's always had a sense of adventure about her and when she discovers an ancient map, the temptation to explore and find what secrets the map holds is too great to resist.

Smurfette and her closest friends (Brainy, Clumsy and Hefty) all fill their beds with dummies and set off on their mission. It doesn't take long before the little blue friends find themselves in more danger than they anticipated. With limited supplies they three Smurfs know that their journey through the forbidden forest is going to be a huge challenge.

Everyone knows fourth grade school children can be little monsters, but what happens when things get way too literal? That's what a bunch of unwitting teachers are about to discover on a seemingly normal working day. Clint Hadson is a substitute teacher who arrives at an elementary school already nervous of what lies ahead. But when some of the children start erupting in strange hives and violently lashing out at each other, it begins to become clear that a horrific virus has hit every pre-pubescent person in the building causing them to launch a vicious, flesh eating assault on their teachers. The grown-ups lock themselves away from the danger and meet one young boy who seems to have evaded the disease. It appears to be a food-borne epidemic resulting from lunchtime's chicken nuggets, and it looks like they're not the only school in the nation with problem pupils...

The film will tell the stranger-than-fiction tale of Gary Faulkner, who tried to single handedly take down Osama Bin Laden.

Russell Brand and Rainn Wilson have joined the cast of Nicolas Cage’s upcoming comedy Amy Of One, adding to a list which already includes Denis O’Hare, Ken Marino, Paul Scheer and Wendi McLendon-Covey. The film is said to have begun filming earlier this month and is due for release sometime next year. 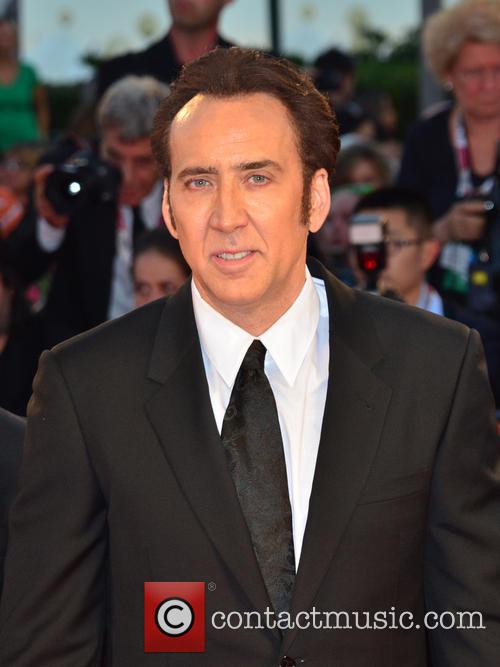 Nicolas Cage will star in the comedy as Gary Faulkner.

The comedy is based around a stranger-than-fiction GQ article by Chris Heath on Colorado resident Gary Faulkner. In 2010 Faulkner decided he was going to be the one to take down Osama Bin Laden, armed only with a sword bought from a home shopping network and a pair of night-vision goggles.

'Gracepoint' stars Anna Gunn and David Tennant posed together on the blue carpet at the FOX Network Upfront presentation at The Beacon Theater in New York alongside a host of other recognisable TV faces.

The Office star Rainn Wilson (he plays the role of Dwight) has recorded a spoof of Angus T Jones’ recent interview, in which he branded Two and a Half Men (the show he’s paid thousands of dollars to appear in, playing the role of Jake) “filth.” Jones was explaining how he’s found God and how the content of Two and a Half Men doesn’t sit easy with him any longer.

Not only was it a cunning way of promoting the new series, it’s damned hilarious and further proof that Angus T Jones may well have lost the plot. Watch Rainn Wilson’s hilarious Angus T Jones spoof here:

Fans of The Office won't be swapping filing cabinets and printers for scenic views and organic vegetables, as the rural spin off, previously announced in January and starring Dunder Mifflin's egomaniac salesman Dwight Schrute has been halted in its tracks.

"NBC has passed on moving forward with The Farm TV show. Had a blast making the pilot - onwards & upwards!" tweeted Rainn Wilson, who plays Schrute. He did, though, implore fans of the series not to be too downheartened, and to keep on watching the show, Reuters reported. The potential spin off would have seen Schrute working full time running a bed and breakfast inn at the beet farm with a cast of new characters. Matt Jones, who plays Badger on Breaking Bad, was to play Schrute's cousin Zeke. Sounds funny to us; we wish it'd been done! Wilson has previously promised that The Farm would be "even more far out and weird" than The Office. But NBC has lately expressed a taste for more mainstream comedy.

The U.S incarnation of The Office, which was created in the U.K by British funny man Ricky Gervais, is currently in its last season and producers have said it will tie up many of the characters' storylines and reveal the identity of those shooting the 'documentary' at the fictional Dunder Mifflin Paper Company in Scranton.

Continue reading: U.S Office Spin Off Given The Red Light

As the end of The Office is nigh, it was expected that various spinoff shows would be tried and tested. The idea that got farthest is The Farm which even had a pilot made. The Farm would have followed Rainn Wilson's character Dwight Schrute, who was the American equivalent of Gareth from the UK version of the comedy, with a setting of a bed and breakfast run by Schrute.

Despite the filming of the pilot, Wilson has now confirmed via Twitter that the show will not be taken any further. "Farm Update: NBC has passed on moving forward with The Farm TV show. Had a blast making the pilot - onwards & upwards!" He said, adding "PS Keep watching the AWESOME final season of The Office. Many surprises & hilariousities coming!" NBC have not yet confirmed this cancellation, but there's no reason an actor would downplay his own comedy series. Luckily, fans will still get to see the pilot as it is reportedly set to be aired alongside the current and final season of The Office. It was also going to star Majandra Delfino who played Dwight's sister Frannie, and Thomas Middleditch who was playing his brother.

Other shows that have been cancelled include Anderson Live! But many more shows have been re-contracted including Elementary, Vegas, Homeland, X-Factor and Arrow.

Since T.J.'s mother died in a lethal car crash he and his father, Paul, have struggled to get on with life and are forced to live with T.J's grandma. When T.J meets a long-haired rocker by the name of Hesher, at first neither person is particularly taken by the other, there's a huge age gap for one thing but after an initial bad meeting Hesher begins to take on the role of a mentor for the young boy.

By Matt Langdon
Very Good
Baadasssss! is a rollicking, high-energy, and monumentally-titled film re-creation of the trials and travails of the making of Melvin Van Peeble's 1971 black independent hit Sweet Sweetback's Baadasssss Song.

The film, based mainly on Melvin Van Peeples' book about making the film, illustrates many of the difficulties that plagued it; from financial troubles and crew infighting, to the demanding logistics of the shoot and family dilemmas, all of which made the entire production nearly fall apart.