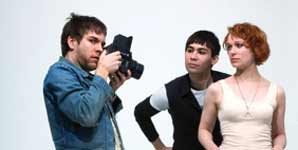 Rainer Maria release of their latest, instantly inspiring album Catastrophe Keeps Us Together, this inseparable trio has always set their sights on uncharted musical territories, rather than mainstream musical trends.
During the past three years, the band has focused almost exclusively on writing, recording and mixing Catastrophe Keeps Us Together. After extensive touring in the U.S., Japan, Canada, and Europe for the better part of 2003 and 2004, they returned to the studio.
Throughout the new album, these tightly structured songs hit many atmospheric highs. Equal parts restraint, taste and power, Catastrophe Keeps Us Together shows Rainer Maria challenging them on every single track. Songs like "Life of Leisure," "Burn" and "Already Lost" sonically burst off the walls and ceilings. And songs like "Terrified," "Cities Above" and the dreamlike cover of "I'll Keep It with Mine" from Nico's Chelsea Girls, written by Bob Dylan, engage the listener at such an intimate level, it's as if the band has lost all sense of boundary between the outside world and their own heads.
Catastrophe was produced be Malcolm Burn, who has worked alongside the likes of Bob Dylan, Patti Smith, Iggy Pop and Emmylou Harris. The band immediately found themselves in a recording environment like no other.
Rainer Maria came together in 1995 in the not-so-sleepy university town of Madison, Wisconsin. Famous in no small part for its long history of social activism, Madison supplied the perfect environment for the members to run a music collective, hosting their own d.i.y. events for seminal Indie/Punk acts such as Bikini Kill, Sleater-Kinney, Make* Up and Promise Ring while these bands were very much in their infancy.

Rainer Maria, Catastrophe Keeps Us Together,...