With a stripped-down, bare-faced performance, Juliette Binoche is utterly wonderful in this tense French drama. Based on the real story of artist Camille Claudel, who was locked in an asylum by her family, the film is an unofficial sequel to the 1988 biopic. And it also continues to provocatively explore the impact of religion in society that has infused writer-director Bruno Dumont's work from La Vie de Jesus (1997) to Outside Satan (2011).

The film picks up Camille's story after she has split up with the sculptor Rodin and established herself as an artist in Paris. But her family is worried that she is living the wrong kind of life, so in 1913 they had her committed to an isolated psychiatric hospital. Over the next two years, her doctor (Robery Leroy) and the attending nuns know that she shouldn't be here, especially since the constant noise from the inmates interferes with any attempt to carry on with her work. When her younger brother Paul (Jean-Luc Vincent) comes for a visit, Camille hopes that he'll finally agree to let her out, but his intense religious believes convince him that the arts are evil and that the best way to care for his sister is to cruelly lock her away.

Yes, Dumont is drawing all kinds of parallels here with modern society and the fears people have of art they don't understand, which would probably include many of Dumont's films. But aside from a brief section that centres on Paul, the film is tightly focussed on Camille, and Binoche lets us see right through her. It's a wrenchingly raw performance that reveals all of Camille's conflicting inner emotions, with glimmers of hope and even bliss as well as the deep yearning to have her old life back so she can once again express herself artistically. By locking in so closely on Camille, Dumont and Binoche force us to experience her incarceration with her, including the daily irritations and small mercies.

Provocative French filmmaker Dumont pushes boundaries even further with an astonishing approach to the Christian narrative (the title translates as Outside Satan), mixing the sacred and profane to shake up audiences and get us thinking. Dumont has never made an easy movie and, by asking us reconsider both our beliefs and the whole concept of cinema, he continually provides exhilarating film experiences for adventurous audiences. But mainstream viewers should be careful of his bold and elusive style, especially in this film. 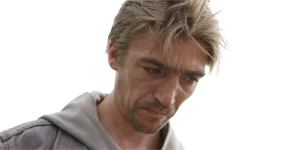 The film centres on a drifter (Dawaele) who's lurking in the scrublands outside a small coastal town in northern France. He seems to be trying to help the locals, and when he meets a woman (Lematre) who's being abused by her stepfather, he steps in and shoots him dead. The woman becomes his devoted disciple, and clearly wants to be more than that, although he rebuffs her advances. But she follows him as he helps a sick girl (Bacquet), exorcises a backpacker (Broutin) in an unconventional way, and walks on water to face a raging wildfire. And whenever anyone does something violent, his reaction is even more drastic.

Most of the incidents here are variations on scenes from the Gospels, but with a creepy twist that combines acts of kindness with rough justice, among other shocking things. Depending on how you feel about religion, much of this will probably seem blasphemous, although Dumont is merely challenging slippery cultural ideas of justice in which guilt and innocence depend on the person's intentions. And by using Bible stories to do this, he manages to catch us completely off guard at every turn.

By Rich Cline
Very Good
Instead of his usual confrontational style, Dumont infuses this reflective drama with raw tenderness. But he's as provocative as always. Which is probably unavoidable with a film about religious devotion (the title refers to a 13th century Flemish poet). 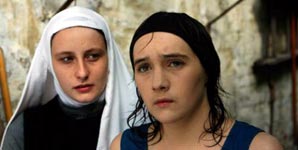 The young novice Celine (Sokolowski) is asked to leave the convent because she refuses to eat. The problem is that she's so overwhelmed by her faith that food seems unnecessary to her. Her love for God knows no bounds, and she's determined to feel him in every moment. She returns to her wealthy parents' lavish Paris flat and meets the young Muslim Yassine (Salime) in a cafe. He's attracted to her but respects her vow of celibacy. And it's his brother Nassir (Sarafidis) who catches her interest with discussions about active Islam.

Provocative French filmmaker Dumont pushes boundaries even further with an astonishing approach to the Christian...

Instead of his usual confrontational style, Dumont infuses this reflective drama with raw tenderness. But...