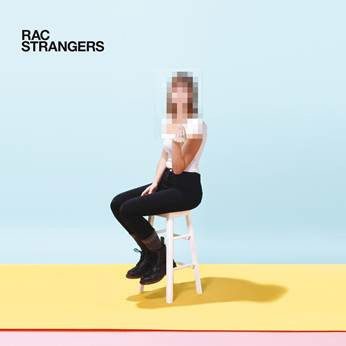 Acclaimed remixer RAC the mastermind behind beloved re-imaginations of tracks by Yeah Yeah Yeahs, Lana Del Rey, and Bastille will release his debut full-length album Strangers this spring on Cherrytree Records. The composer, producer, arranger, and recording artist born Andr' Allen Anjos will release Strangers in two parts and as one complete collection on CD and vinyl.Strangers Part 1 is a 7-track digital-only release and is due March 4th. Strangers Part 2 out April 1st will contain 9 additional new tracks also to be released digitally.  That same day, Strangers, the complete collection of 16 tracks will be released digitally, on CD and vinyl.

Andr' co-wrote and produced every song on Strangers, which features an impressive array of guests including, Alex Ebert (of Edward Sharpe and the Magnetic Zeros, and 2014 Golden Globe winner for Best Original Score) Tegan & Sara, Penguin Prison, Tokyo Police Club, Katie Herzig, along with Bloc Party's Kele and rising electro-pop star MNDR, who both feature on "Let Go," the lead single that hit No. 1 on Hype Machine's Artist and Popular charts, and which Entertainment Weekly deemed "a dreamy end-of-summer pop concoction that will have you grooving well into fall."  Strangers features album art by Lawrence Azerrad, who has also created cover imaging for Wilco, Red Hot Chili Peppers, Jay-Z, and Brad Mehldau with photography by Andrew B. Myers,

RAC will hit the road in February for the "Strangers Live" world tour, which includes shows at SXSW and at the Ultra Music Festival in Miami. Please see below for all tour dates. Special guests Prides, Speak,Panama Wedding, and Ghost Beach will provide support on various dates.  Tickets go on sale Friday, January 31st.

Originally born and raised in Portugal to a Portuguese father and an American mother, RAC settled in Portland, Oregon, where he began to forge his unique brand of indie-pop by creating over 200 inventive remixes forKings of Leon, Bob Marley, and U2 among many others. His remixes have reached No. 1 on the Hype Machine charts 26 times and his first solo recording, "Hollywood," featuring Penguin Prison hit No. 1 on all four Hype Machine charts at once, while his tracks have over 22 million Soundcloud spins. Tracks from hisDon't Talk To EP, which was released in October, have been streamed over 5.5 million times.