The Mean Streets Of Chicago, Illinois Gave Quincy Jones The Toughness He Needed For The Music Industry, Because The Gangsters And Hoodlums Who Prowled Around His Neighbourhood As He Was Growing Up Made His Harshest Critics And Maniacal Moguls Look Like Pussycats By Comparison. 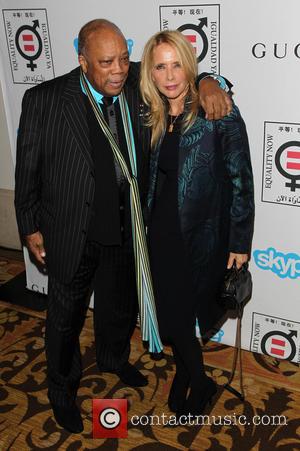 Picture: Quincy Jones and Rosanna Arquette - A variety of stars attended the "Make Equality Reality" Event which was presented by Equality Now and held at...

The legendary producer spent 11 years in Chicago before his family moved to Washington, D.C. and in that decade he witnessed a lifetime of hurt, pain and violence that he'll never forget.

Jones tells The Hollywood Reporter, "There’s something in the water there, I don’t know what it is. But the actual word Chicago means, in the Indian language, garlic. It was just garlic and mosquitoes there.

"That is the roughest city on the planet, and I've been to every place in the world. When I got out of Chicago, there were five million black people during the Depression. South Side of Chicago was no place to be. And when I got out, Compton (in Los Angeles) and Harlem (in New York) looked like Boys Town (colourful gay area of Los Angeles) to me.

"Chicago’s rough. I still have my medals. They stuck a switchblade in my hand when I was seven years old and nailed it to a fence, and they put an icepick in my head, at seven years old... You don’t forget that, you know? Or when somebody puts your hand through the fence.

"My daddy was a carpenter that worked with the Jones boys, who are the most notorious (gang) in America. The black gangsters, you know, they were no joke. He was their master carpenter. He used to build their homes, and all I saw when I was 11 years old were dead bodies and tommy guns and stogies. It was so much gangster stuff."

And memories of his early street life came rushing back to him when he heard fellow Chicago star Jennifer Hudson's mother, brother and nephew had been murdered in a 2008 killing spree.

Jones adds, "Jennifer Hudson, and that thing happened to her, I just felt it like it happened to me, you know? I could feel it. Her brother-in-law did it, you know. Killed the mother, brother, all them."