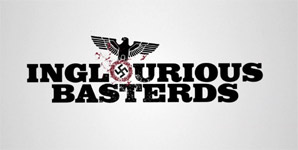 Quentin Tarantino has been talking - and talking - about making a World War II movie called Inglourious Basterds for more than a decade (he explains the misspelled title as an 'artistic flourish'). Unsurprisingly, the film is polarising critics and the public with his usual mash-up of movie references, talky dialog and history-changing antics. Film critic Rich Cline found out where he got his inspiration...

Tarantino: When I first sat down to write the film, I was thinking of the bunch-of-guys-on-a-mission genre, and so the touchstones were films like Where Eagles Dare, The Dirty Dozen, Devil's Brigade and Dark of the Sun. And I still love those movies. But having said that, what I found most inspirational was watching a lot of the movies made in the '40s by foreign directors who were now living in Hollywood. They couldn't live in their home countries because the Nazis had occupied them. You're talking about Jean Renoir with This Land Is Mine, Fritz Lang with Man Hunt and Hangmen Also Die, Jules Dassin with Nazi Agent and A Reunion in France, Douglas Sirk with Hitler's Madman. And one of my favourites, who I had not heard of before, is Russian director Leonide Moguy who did an action movie called Paris After Dark about the French underground.

Why were these films more important?
These were movies made exactly at the time of World War II. The Nazis weren't the theoretical evil boogiemen from the past; they were still a threat. This was actually going on! Not only that, many of these directors had personal experience with the Nazis. And I'm sure all of them, living in exile, obviously had people that they were concerned about back in their home countries. Yet these movies are entertaining - they can be thrilling, they're exciting, many of them have quite an amount of humour in them, in particular something like To Be or Not to Be by Ernst Lubitsch. And they're so literate; the dialogue in these movies is so fantastic. So these were the movies that I got a tremendous amount of inspiration from. Not that I did anything stylistically that was like them; I didn't shoot in black and white, and I didn't try to recreate them. I was inspired maybe by their sense of set design, but there's nothing stylistically that you can rank my movie with theirs other than possibly, hopefully, entertainment value.

Well, all the music in your film comes from other films.
Music is very important in my movies. In some ways the most important stage, whether it ends up being in the movie or not, is when I come up with the idea itself, before I've actually sat down and started writing. I go into my record room - I have a big vinyl collection and I have a room set up like a used record store - and I just dive into my music, whether it be rock music or lyric music or my soundtrack collection. What I'm looking for is the spirit of the movie, the beat that the movie will play with. And part of that is to immediately jump to the screening process, because when I find the right piece of music with the right cinematic set piece, it's usually big s**t like the opening credits. I can actually visualise myself sitting in a movie theatre and watching it on screen. The images are provided by my imagination, but the music is right there and I'm cranking it! And all through the writing process I'm always going back there to invigorate myself, to remind myself what it is I'm doing, and keep remembering that it's not just words on the page. Because I'm a very precious writer and I can get caught up in that, so I have to remind myself that I'm making a movie. And that process continues to go on during the shooting. And then the third wave is when I'm editing. Sometimes there's a big moment that I've had in my mind forever, but now it's just not right when you put the music against the images. So you find something else, and, 'Oh my God, that's so wonderful, I can't believe I ever was in love with that other thing!' But what's interesting in the editing process is that it's less about the big moments, and now I'm thinking more minutiae. And that becomes really fun, looking for these small moments, these small cues from some obscure soundtrack.

Do you carefully plan which project you'll work on next?
I mean, whatever turns me on to write the story is what turns me on. I was too Machiavellian about it, I wouldn't have done Grindhouse with Robert Rodriguez. In that case I just wanted to do it - it seemed like a fun thing to do. We didn't know it was going to turn into this year-long thing and become such a big f**king deal. It was supposed to be this cool little fun thing that we did over the summer. We kind of got derailed as far as our initial idea was concerned, even though I'm a real fan of the movie. So there is that thing: 'I'm interested in this story, it excites me and I want to do it.' But I believe a filmmaker lives or dies by their filmography, and if you muck about too much you cheapen your entire artistic standing. I admire directors that retire at a certain age so they don't just cheapen their filmography with four limp-dick old-man movies at the end of it. That was one of the ideas behind saying something like, 'the fourth film by Quentin Tarantino' with Kill Bill. You can say that is self-aggrandising, and maybe it is to some degree or another. I'm not counting them that way anymore, but I think it is realistic to say your first movie is your first movie, because there's something very special about that, and your second movie is your second movie and so on. I probably will tend to think in terms like that, because I am a student of cinema, and I see where directors have gone wrong - at least where I think they've gone off-track or where there's not that excitement about their work that happened before. I frankly don't want that to happen to me.