It's looking rosy for fans of QT next year

Quentin Tarantino star shows no sign of relenting. The ridiculous (it’s the best and only word to describe him) director has hinted that ‘Kill Bill: The Whole Bloody Affair’ could be on its way, while a new poster for his upcoming movie, The Hateful Eight has been revealed. 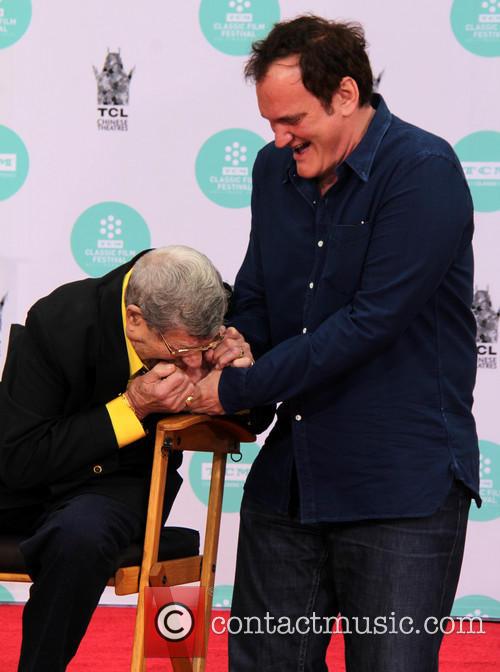 Quentin Tarantino has a laugh with Jerry Lewis

Kill Bill: The Whole Bloody Affair is a longer cut of Q.T’s two-part revenge/martial arts epic, and the extended version is reported to include a 30 minute anime sequence. Film Divider were first with the new poster for the director’s troubled Hateful Eight picture. They released a picture of next week’s Empire magazine, which features a trailer being drawn by six horses leaving a trail of blood behind them. With that out in 2015 and the possibility of a super-extended Kill Bill volume, it might be the year for fans of the cult director.

Here’s what Tarantino said regarding ‘Kill Bill: The Whole Bloody Affair’ (via Slashfilm)

“What’s going on with that is originally back when Kill Bill was going to be one movie, I wrote an even longer anime sequence. So you see in the movie [O-Ren] kill her boss but then there was that long hair guy… The big sequence was her fighting that guy. I.G. [The Japanese Anime Studio] who did Ghost in the Shell said we can’t do that and finish it in time for your thing.

“And [plus] you can’t have a thirty-minute piece in your movie. I said okay. It was my favorite part but it was the part you could drop. So we dropped it and then later when I.G. heard we were talking about doing Kill Bill: The Whole Bloody Affair — they still had the script so without even being commissioned, they just did it and paid for it themselves,” he added. “It’s really terrific. Anyway, The Weinstein Company and myself were talking about actually coming out with it sometime, not before the year is out, but within the next year with limited theatrical engagement as well.” Phew.