Here are just a few.

We've been warned that Quentin Tarantino only plans on doing two more movies before his retirement, to round off his career with a perfect ten. The problem is, there are just way too many ideas tumbling out of him right now - and we kind of want him to do them all. In a recent interview with Time Out New York, 'The Hateful Eight' director laid bare the current possibilities for future movies. Unlike World War II thriller 'Inglourious Basterds' or martial-acts cult film 'Kill Bill', he admits there are no more genres he's desperate to re-create. However, he would like to do another gangster movie, this time based in the 1930s; 'That kind of John Dillinger thing', he says.

He is also considering a 'contemporary' film to include some elements he's always wanted to use. '[Something] where I can have a character who gets in a car and turns on the radio, so I can have a cool driving montage', he explains.

Probably the most exciting prospect is, however, a 'really, really scary' Tarantino horror movie. The very thought evokes memories of 'Grindhouse' - and we can only imagine that it would be a film to rival co-segment directors Eli Roth ('Hostel') and Rob Zombie ('Halloween). But Tarantino had more of a supernatual horror in mind 'like The Exocist'. Don't get your hopes up though, because Tarantino thinks his time is much more valuable than that. 'I don't know if me taking my sense of humor and putting it in the backseat just to hit a tone of dread from beginning to end is the best use of my talents or my time', he admits.

On the other hand, he says that 'The Hateful Eight' is the closest he's come to a horror film. 'More than any other Western, the film that influenced this movie the most is John Carpenter's 'The Thing''.

Then, of course, there's a recurring possibility of a 'Kill Bill' sequel. 'I'm not committing to it, but I wouldn't be surprised if The Bride made one more appearance before the whole thing is said and done', he told Variety. 'I am talking to Uma [Thurman] about it just a little bit. Some of the stuff that I'd written that never made it into the movie that maybe I could use.' 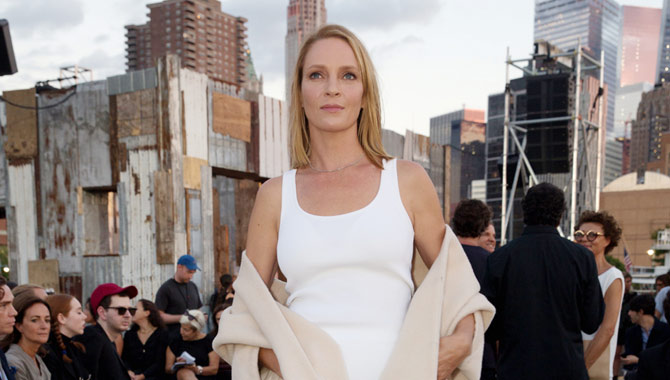 He even brought some of his creative suggestion to UK television in an interview with Absolute Radio, unveiling perhaps the best idea for an 'EastEnders' Christmas Special ever. 'It'd be fun to have a Christmas Special, invite all the main characters over for a big Christmas party and then someone poisons the eggnog', he says, charmingly.

Something like 'EastEnders' could still be a possibility even after the ten movies. 'It usually takes me about three years to make a movie anyway, so you're talking about almost a decade left', he says. 'I might do a TV thing in between, and that wouldn't be part of the 10.'