Queens Of The Stone Age's new album is sounding ''so badass,'' according to the band's close friend Jesse Hughes. 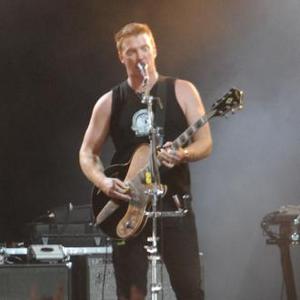 Queens Of The Stone Age's new album is sounding ''so badass.''

The 'Little Sister' band are recording the follow up to 2007's 'Era Vulgaris' and friend of the band Jesse Hughes says he's excited about what he's heard so far.

He told NME.com: ''The s**t I've heard from the new Queens album is so badass. It's really cool.

Referring to the band's leader, Jesse - who fronts The Eagles of Death Metal - added: ''because Josh Homme's my best friend, I'm very fortunate in that I get to be privy to a lot of the cool s**t that happens, Including the writing process for the new Queens album.''

The band had originally started writing material for the album as early as 2008 and started recording in January 2011, but have worked at a relaxed pace.

Guitarist Troy Van Leeuwen said at the time: ''There's still some writing going on. We're a band that doesn't push things, things naturally happen, and they are.

''We're kinda sprinkling this year with some touring and then doing some recording. It's going to be a creative time, and that's good, but we're still early on.''

A little later in the year Josh claimed the sound of the record had changed, saying: ''What we were doing was kind of bluesy and now it's turned into this trancey, broken thing. The robots are back.''