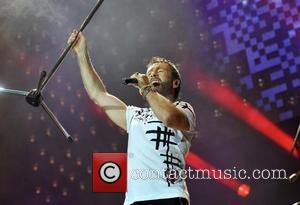 British rapper Dappy wants Queen legend Brian May to make him a guitar after hearing how the rock legend crafted his first instrument out of an old fireplace.
The unlikely pair has teamed up to collaborate on a new track, entitled Rockstar, after the legendary guitarist reached out to the N-Dubz frontman to praise him for his hit solo song No Regrets.
After learning May built a guitar using wood from his father's home, Dappy is eager for the star to help him make an instrument for himself.
He tells Britain's Daily Star, "I would love Brian to make me a guitar. He told me all about his guitar that he made with his dad out of wood from a fireplace in his old house.
"He even got a five-sided coin to put in the neck and he replaced the Queen's head with his own head. Now that's his pluck, so I want one with my head on it."
He also reveals May has become his musical mentor since their studio session, adding, "Brian bigged me up for my last single and said I should win an (British songwriting award) Ivor Novello for lyrics.
"He told me: 'You are a very different artist and unique, so carry on doing what you're doing. There's nobody else challenging you.'"