Queen Rocker Brian May Has Co-founded A Campaign To Stop Wealthy London Homeowners Building "Mega-basements" Under Their Properties. 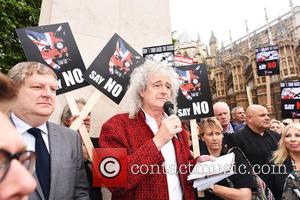 The guitarist, an outspoken advocate for a number of humanitarian causes, is supporting Will Davies' #BantheBasement campaign, in which the businessman calls for restrictions or bans on homeowners' plans to extensively expand their properties below ground.

May and Davies are among those who fear the construction projects are dangerous to workers, and May is personally affected by the noise created by renovation work taking place in his affluent neighbourhood of Kensington and Chelsea.

"I make no apology for describing these people as basement-building b**tards," he tells Britain's Independent on Sunday. "Even if what these people are doing is technically lawful, they are destroying decent residential areas. This is a behaviour so antisocial that action clearly now needs to be taken to bring the perpetrators to justice.

"What we need is for a ban on all work which will compromise the peace and quiet of neighbours for long periods. We need a recognition that councils are there to protect the wellbeing of their residents - and this means stiff penalties for those who cause serious disturbance."