Formation: After each member's former bands split up, the four members joined together to form Pulled Apart By Horses. James Brown contacted Lee Vincent, formerly from the band Concentration Champ, through a music forum. James Brown wanted to start a band in Leeds, taking inspiration from such bands as "The Jesus Lizard". The pair invited Robert Lee to play bass, and the trio rehearsed regularly on the outskirts of Leeds. They then invited Tom Hudson, lead singer, to join them after his previous band, Mother Vulpine, broke up. After their final formation in 2008, the foursome consistently rehearsed above 'The Packhorse' pub in Leeds, where they also performed live shows and secret gigs.

There was a time when Pulled Apart By Horses were leading the charge of weirdo rock music in the UK. Their 2010 self-titled debut was an in-your-face, angular riff storm reinforced by oddball lyrics. Gradually, they became a smoother act, with 2014's 'Blood' displaying a more nuanced stoner rock sound, however they managed to maintain their quirkiness with hypnotic songwriting and a spellbinding atmosphere. Here we have their latest record 'The Haze' which sees them switching things up yet again.

The title track kicks this record off to announce a very different Pulled Apart By Horses with a much more indie-rock sound than what's proceeded, made up of breezy, summery guitars that still pack a punch with the pedal-to-the-metal speed they're going at. 'The Big What If' has more burliness and stomp to it, with the guitars being that little bit more firm, but it carries the baton from the previous song.

'Lamping' is the most relaxing song the band have ever done. It might have some firm, muscular riffs here and there, but a lot of this song feels like it's lying down in the park with the dreamy, psychedelic vocals and guitars gazing up into the sky. It's a surprising direction for the band, even on this album, but they do great job of it.

Leeds rockers Pulled Apart By Horses talk about the band's beginnings, songwriting and their Dr Martens Stand For Something shows in a clip from their 2014 European tour diary. 'When we started practising, it was just me and Rob and Lee, we didn't have a singer', says lead guitarist James Brown. 'We were just jamming - there wasn't a band, it was just p***ing about, something to do.'

Pulled Apart By Horses burst onto the scene four years ago with their self-titled debut which saw them immediately rise to the top of the UK underground both in terms of the quality of their music and success with a noise influenced hard rock sound. They then followed that with 'Tough Love' in 2012; an album that saw them brush off some of their rawness and heaviness to embrace their accessible rock side. Now with 'Blood' they cast aside even more of that original sound - but it's by no means a bad thing.

Kicking things off is 'Hot Squash' which signals that Pulled Apart By Horses are opting to hypnotise and entice you this time around rather than kick you in the teeth. They do this with the more groove orientated riffs and vocalist Tom Hudson adopting an eerier tone. 'ADHD In HD' starts off in a clangy way that's almost no-wave. It goes on to take a Sonic Youth influence with a sarcastic tone underlined by seriousness, not to mention the jumpy breakdown and erratic ending. 'Skull Noir' might as well be called Skull Crushing; it's opening riff hits you so hard with Black Sabbath-esque strength and doom, before going into more high octane jumpy rock 'n' roll with 'Life will always get you hurt' being bluntly repeated. 'You Want It' is built up with fuzzy bass and driving drums before becoming the most energetic track on the album with its 'I'm going out of my mind, but I can take it' sentiment.

When listening to this album you see a band that have evolved from impatiently hammering out noise to patiently putting a spell on you. That's not to say that their spontaneous work is bad (it's actually really good), but the band focusing on their craft has resulted in them creating a different kind of beast altogether. Take 'Outahead' for instance; where Hudson once screamed bloody murder in your face, he now dizzies you with his gloomy vocals which one can't deny is just as effective. Following that is 'Medium Rare' which is their grooviest song yet; an incredibly loose and danceable hook that Queens Of The Stone Age probably wouldn't have minded claiming ownership to. The album ends the most upbeat thing the band have ever done with the guitars cooled down a notch and Hudson joyously yelling the song's title.

If you've paid any attention to the UK rock scene over the last few years, you'll probably be familiar with Leeds quartet Pulled Apart By Horses, with their unique, noise-influenced, heavy rock that saw them quickly rise up through the underground and take a step into the mainstream. After 2010's wonderfully weird self-titled debut as well as 2012's more accessible 'Tough Love', they are back with new single 'Hot Squash'; a taste of their upcoming third album 'Blood' (out September 1st via their own label Best Of The Best).

'Hot Squash' appears to go further down the more straightforward route that 'Tough Love' took, sounding considerably mellower compared to their older material, with slow groovy riffs that wouldn't sound out of place on the last Queens Of The Stone Age album '.Like Clockwork'. Tom Hudson's vocals seem to have calmed down too, with him hypnotically pulling you in as opposed to screaming himself hoarse, like he would've done on PABH's debut. This less frantic sound works really well for the band and, despite the changes, this still feels like Pulled Apart By Horses thanks to the subtle jinks here and there, such as the space-like sound effect that halts the rest of the song about two minutes in.

A great song that shows a new side to the band and sees them on the next logical step of their evolution. If the rest of 'Blood' is this good, we're all in for something special.

Leeds rockers Pulled Apart By Horses have unveiled the music video for their song 'Epic Myth' featured on their second album 'Tough Love' which came out in January 2012 on Transgressive Records and peaked at number 67 in the UK charts. The record has now been released as a deluxe edition featuring four bonus tracks.

The band are featured suited up with Blues Brothers-esque sunglasses, drinking together, smoking cigars and generally having a laugh. It reflects the chaotic sound of the song with its heavy guitar riffs, loud drums and shrieking vocals; it sounds exactly like it is the result of four minutes of fun rather than carefully constructed musical work. The video, of course, WAS just the result of a night of fun with guitarist James Brown insisting that the band had the 'worst collective hangover' the morning after.

Brown also mentioned how busy their year has been what with opening the main stage at the Leeds/Reading festival for the first time and embarking on a string of sold out shows. 'It has been one hell of a year for us and we're knee deep in writing now and looking forward to next year', he said. Drummer Lee Vincent has described 2012 as 'monumental' and is 'proud' to reveal more of their work from over the years. 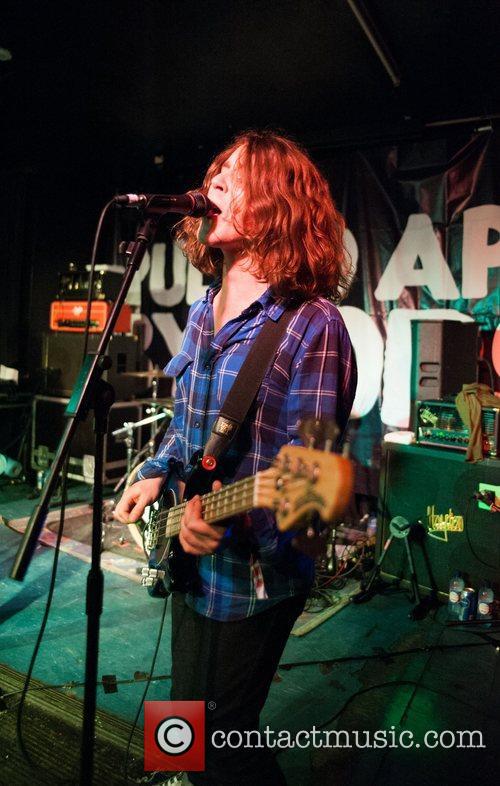 Pulled Apart By Horses release 'Yeah Buddy' on 29th November 2010 through Transgressive Records, this is the third single from their self-titled debut album which was released in June.

2010 has been quite a year for the four piece from Leeds, having played all the majority of UK festivals, toured with Muse and Biffy Clyro and currently on a headline tour of the UK it seems the boys aren't close to stopping anytime soon as they're also set to go on the road with Foals in the near future.

Yeah Buddy is backed by the B-side 'Soft Handed Punk' and is available on 7" and as a digital download. 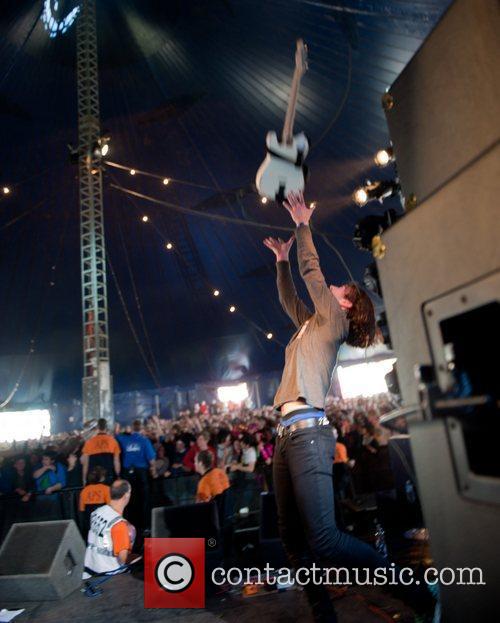 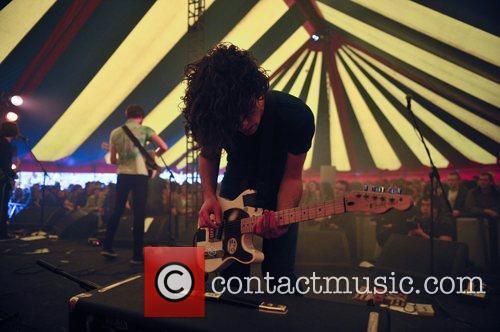 Leeds based rabble-rousers Pulled Apart By Horses are one of those bands who fit into the "once seen, never forgotten" category. Having seen them on many occasions over the past year or so, my abiding memory of the four-piece came at last year's Latitude Festival when singer Tom Hudson aimed a volley of phlegm into the air that landed smack in the face of drummer Lee Vincent's girlfriend, innocently pressed against the barrier enjoying the show. Indeed its this inclination of not knowing what will happen next that makes Pulled Apart By Horses such an endearing spectacle, not to mention the fact they have a bucketload of tunes in their armoury too. 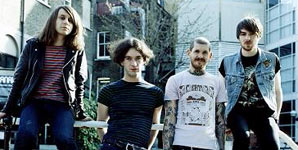 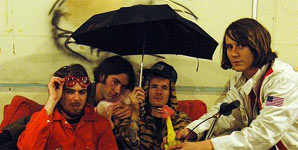 Meet Pulled Apart By Horses, possibly the most exciting new band to grace these shores in a long, long time. A four-headed shot of adrenaline straight through the eyes for certain, except they have riffs the size of Monster Trucks and tunes aplenty to go with it.

Pulled Apart By Horses - The Big What If Video Video 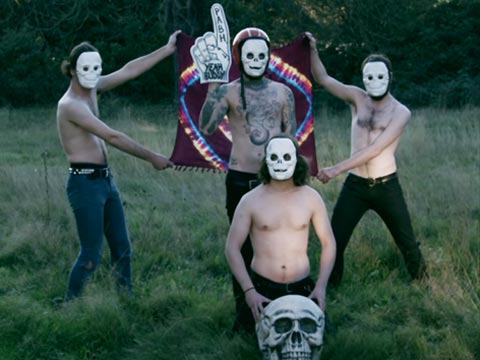