Psy’s New Video For Gentleman To Be Revealed, Shout Out To Korea Planned

Psy's new track was released without a video

Psy is known for one thing and one thing only: his hair. Nah, we’re kidding, it’s Gangnam Style, obviously. But will he start another ridiculous trend at Seoul's World Cup stadium? See that’s the concert in which the video for Gentleman will be revealed.

The now-global superstar describes the division of the Korean peninsula as a "tragedy", and says he wants North Koreans to share in the "fun and happiness" of his music. "Tonight me and 50,000 Korean people...we are going to sing out loud. We are going to shout out loud and we are really close to them, so they can hear," he said. "Hopefully with my 'Gangnam style', 'Gentleman', and my music video, choreography... hopefully they might enjoy it too," he added. Gangnam Style was an unprecedented success and took the world by storm. It was the first video to reach one billion views on YouTube, and since then, it has become the most-watched YouTube video of all time, registering more than 1.5 billion views since it debuted last July. Because of that, the decision to release Gentleman without a video came as quite a surprise. 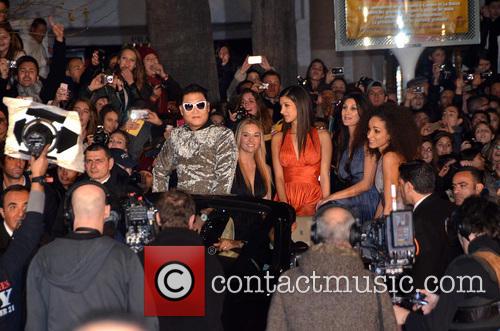 Psy went from domestic to worldwide star in... 5 minutes?

Now is a time of political tension between North and South Korea, with the South’s armed forces on heightened alert for an expected missile test. Will Psy be the man to bring these nations together and ease any worldwide tension? We very much doubt it, but we can have a laugh dancing to his tunes, though.