Read our review of Eye of Judgement: Legends on the Sony PSP

Being unfamiliar with the Eye of Judgement franchise and judging it entirely from the name, I had no idea whether it was a puzzle game, an adventure game or an RPG. It turns out that it is somewhere in between. Owing a huge debt to the ever popular 'Magic: The Gathering' collectable card game, Eye of Judgement: Legends, is a card-based puzzler in much the same vein and containing a similar mix of creatures and spells. However, underneath its copy-cat appearance lies a solid core game with reams of backstory, a full cast of characters and enough varied tactical gameplay to keep most players happily drawing cards for many days. 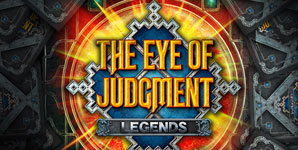 Set in a typical fantasy world the story concerns the journey of the chosen one and his companions as they attempt to combat the menace of an evil cyborg race known as the bioliths before they take over the world and plunge it into eternal darkness. The world is divided into lands of Fire, Wood, Air and Water which make up the alignments of the creatures that live there. Wood equals elves and goblins, earth equals dwarves and well, you know how this goes... Its pretty much your standard fantasy plot and is typically overblown and epic in its scale. Delivered via comic book cut scenes the story includes numerous characters, twists and betrayals and is pretty hard to follow. And because of the lack of any interactivity in these segments, I found myself skipping them pretty early on. Thankfully they are little more than linking elements that join the game's various battles together and so nothing integral to the actual gameplay is lost by ignoring them.

In between these chunks of impenetrable story lie the actual battles. Taking place on a 3x3 board, the winner is the first to summon five creatures to the playing field. Creatures cost mana to summon (of which each player receives two per turn) with the more powerful and deadly ones costing more than the weaker and speedier types. Each creature has its own unique attack patterns and game changing effects, and the skill lies in finding the best square on the board to place creatures in order to maximise the damage they do to your opponent's creatures whilst minimizing and blocking the weak spots and vulnerabilities of yours. The inbuilt tutorials are frustratingly unhelpful for beginners and it'll take a few games to get the hang of it, but once you do, it's a relatively simple concept. One that at its best resembles the depths of chess as you weigh up and consider the various moves and placements of your creatures and at its worst can descend into top trumps for the PSP, where simply trying to summon bigger monsters than your opponent is the key to success.

Above all this, as in other collectable card games, it is crucial to consider the actual cards that make up the deck that you battle with. Starting the game with a simple starter deck, it won't be long until you've built up a large library of new and alternative cards, as new cards are rewarded after battles and can be bought in the shop with credits earned. Choosing which cards to include in a deck can be quite an art, finding a good balance between cheap and expensive creatures and also working out which cards that work best with each other in combination, are both vital skills needed to create a decent, battle worthy deck. To make matters, worse the difficulty of battles quickly ramps up after the first few skirmishes with some of the more fearsome opponents requiring you to custom tailor a deck of cards specifically to counter their playing style. At first the choice of cards and their effects can be a little overwhelming to choose from. However once you have built up a large collection it becomes apparent that most creatures are duplicated in some form or other in all of the game's four elements. So sometimes it can often seem that the differences in choosing which types of cards to load your deck with are more of an aesthetic rather than tactical choice.

All though not as deep or as tactical as it would first seem, Eye of Judgement: Legends is still a good game that manages to bring a lot of the customizability and cunning of a traditional collectable card game to a handheld format. Unfortunately an impenetrable plot filled with an uninspiring cast of fantasy 'usual suspects' spoils any sense of individuality that would push the Eye of Judgement franchise to stand out above its competitors. Still if you can look past all the goblins and elves, there is plenty here to enjoy.