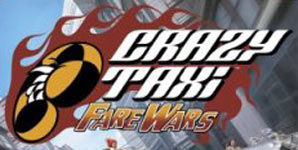 Back in the day, when the Sega Dreamcast was hot property, Crazy Taxi was a rip-roaring arcade racer full of frantic fare catching and high speed action. The two Crazy Taxi titles that appeared on The Dreamcast have been ported onto the PSP and rolled up in a bundle with some multi-player action, training, mini-games and other extras.

The question is.do these titles from yester-year still cut it??

For those of you who didn't experience Crazy Taxi on the Dreamcast I will quickly fill you in on the story.

In both titles, the goal is to control one of four different cabbies and drive around the city picking up customers and getting them to their desired location. The more knowledge you have of the streets you're working the quicker you can get your passenger to their destination and the more you can earn.

Although this doesn't sound like the most exciting game-play format ever the game just worked. The speed plays a big factor and the faster you go the more your passengers enjoy themselves..like in OutRun. So you grab a fair then hurtle through the streets bouncing around, drifting around corners, avoiding fatal crashes as you race to their destination and the more hectic it gets the more points you gain. The city is scattered with jumps and in Crazy Taxi 2 there are even hydraulic jumps.

Only skilled cabbies need apply for Crazy Taxi: Fare Wars, where drivers need to be more aggressive than ever to earn the big money by speeding fares to their destination, no matter what the obstacles. You can steal passengers from other cabbies by bumping your opponent's car creating chaotic competition on the road!

Navigating through traffic, hills, and obstacles isn't easy, so it takes a skilled cabbie with no fear to earn the big bucks. Players can drive through the two original maps of Crazy Taxi, the arcade map and the original Dreamcast map, both inspired by the steep hills, trademark cable cars, and breezy waterfront of San Francisco. Then they'll head for the Small Apple maps in Crazy Taxi 2, which is inspired by New York's large building fronts, hectic downtown streets, and the city's famous Central Park and subway system.

Crazy Taxi: Fare Wars offers several single player modes including the mission-based Arcade mode, where good drivers earn time bonuses, and Time Trial mode where you collect the highest fares possible in the time allowed. In addition, you can practice your crazy driving skills or play the two mini-games. There is also training modes available.

Drivers can also record and save game-play replays of their driving performance in Crazy Taxi 2 on the PSP system's memory stick to replay and show off.

Overall what you get with this title is a good old classic game on a modern hand-held machine. The graphics and controls are not cutting it in this day and age buy hey, that doesn't affect the game-play. If you were a fan of the original then you will enjoy the trip down memory lane.