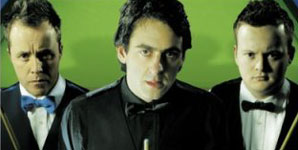 World Championship Snooker 2007 is the official title of the sport and does a very good job of mimicking the true life action. The main problem the title faces, however, is that it is attempting to capture a sport that is hardly all action. Don't get me wrong, I like playing snooker and I like watching snooker, but the sport is hardly 100% in your face, edge of your seat stuff is it? It has its moments but they are few and far between and the problem here is how do you relay this into a gripping video game title that is as entertaining as it is appealing in the long term?

WCS 2007 starts impressively with a title screen that whets your appetite for what is to come. Throw in the fact that this is a PS3 title and you might just get a bit giddy... As you make your menu selection and press on into a match up however, you soon realise that some of your optimism is misplaced. The player graphics look clunky and unrefined with player animations looking rather less than fluid. Little flaws, such as when you under-cue and the cue itself seems to go straight through the cue ball, leave you a bit underwhelmed. Your immediate thought at this stage is that this, graphically speaking at this stage, is an underdeveloped PS2 title that has been released on the PS3 to coincide with its launch.

So how does the title play? Well, it's a mixed bag in all honesty. I'll start with the positives. The computer AI is probably the best thing about the title. Whilst it will take you a while to get to grips with, your artificial opponents will take any advantage of sloppy potting from the gamer in a variety of ways and perhaps this is how the PS3 title comes into its own. Furthermore, WCS 2007 has imported world championship graphics that will be familiar to anyone who has watched them live from The Crucible, Sheffield before now. There are also a vast array of players to choose from and unlock as well other cue sports such as billiards and a range of pool variants. There are also a variety of modes from a career option, to trick shots, golden cue, commentary from your real life favourites (and non-favourites,) online net play and an offline multiplayer.

The downsides? Well there is definitely one. The particular failing in the gameplay relates to the control system which just seems far too overly complicated to either play quickly. The game demands that the player uses several less than intuitive differing controls to take just one shot. Moving from side to side to place your angle is just too quick to be useful and the developers seemed to have realised this as if you hold down a trigger button, you can "fine tune" the angle, but in reality all this does is slow it down far too much. On top of this there is another option to go into to regulate cue power, another for where you are striking the cue ball, another for which target ball to select and so on and so on.. You could just take a stab at it with the right analogue stick, but this rarely produces anything like a good shot.

This said, if you can master the controls, there is a very good snooker title hiding behind the annoyingly intricate controls. With the improved AI, you may have to take a few beatings before you can enjoy this, but the snooker enthusiast it is probably worth it. Difficult to describe in a nutshell, but if I had to I would say that on the face of things it is an unattractive and overly complicated game, but one that would reward those who put the hours in by opening up to them to reveal its inner beauty.