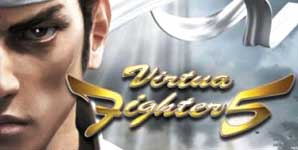 Virtua Fighter returns in its fifth incarnation over the last decade, and violence is once again on the agenda. Having paved the way for the 3D fighter genre and for the likes of Tekken and Soul Calibur to follow in its wake, would Virtua Fighter 5 roundhouse kick Sega's flagship fighting game into the next generation on the PS3?

The graphical design is art based rather than true-to-life and you can immediately tell that this looks like a next generation title. The HD resolution is supported up to 720p, so it has not been pushed to the limit, but a lot of time and effort has been put into the characters, environment and backdrops. Speaking of characters, there are now 17 fighters and VF5 includes 2 new combatants from the previous PS2 incarnation. Eileen (using some form of monkey Kung-Fu fighting style) and the Mexican fighting champion 'El Blaze' join a cast of old favourites to battle it out for the fighting crown.

The main menu offers few options across arcade, versus, quest, dojo & VF.TV (watch your fight replays. wow!) - a single player mode and an offline multiplayer are what you have when it boils down to it. This looks like a specific ploy from Sega to keep the title simple to avoid over complications and over subscribing the user with options which could be attributed to some of its competitors in the genre. The lack of an online multiplayer can only be deemed a drawback in this day and age and would be whatever the title really on any next generation release.

So how has the action evolved? Well Sega claim to have introduced the "Offensive Move" manoeuvre system which allegedly allows players to make an attack easier from the side to add to the fluency of the fight. I haven't really seen much evidence of this. Not that you can't attack from the side, but more that you could in previous incarnations and nothing has really changed much in this respect. Button mashing as a fighting technique does not really cut it as there are a vast amount of combinations to learn and utilise. This coupled with the fact that, whilst the graphics are 3D the gameplay feels a bit one dimensional - with a couple of taps downwards on the d-pad giving you a slightly different angle of attack the only variation from this - gives it an old school feel. This may appeal to hard core fans of Virtua Fighter but is likely to alienate those from new user to occasional who are looking for something more from the step up to the PS3.

I would like to say something appealing about the sound but I can't. I haven't really got a beef with the action sounds of punches and kicks landing because, and lets be fair, what more can you with this? But the cringe worthy and repetitive jibes each fighter makes before each fight, makes me angry enough to step in the ring with some of them just try and shut them up.

In conclusion, it seems that a lot of what Virtua Fighter 5 is based on has been done before, be it the focus on fighters stances, the same fighting game engine or lack of options. The newly improved graphics are worth a look but I am not sure whether VF5 has done enough to tempt new followers into submission, especially with no online functionality. Hardcore Virtua Fighter fans will love it but there is nothing significant to set VF5 aside from its predecessors.