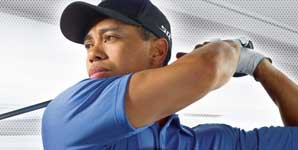 Tiger makes his debut on the PS3 with Tiger Woods PGA Tour 2007 which has already appeared on the last generation machines. The PS3 version is quite different to the PS2 version however it's almost identical to the Xbox 360 version though, which in this case is a good thing. The create a player feature is very good, visually the game looks great and there is a new aiming system which makes Tiger Woods PGA Tour 2007 more challenging.

From popping the disc into the PS3 you will immediately notice the presentation is very slick. You have many options to start with but you are encouraged to create your own golfer straight away. The create-a-golfer mode makes it very easy for you to create a look a like of yourself or whoever else you want to model your golfer on. My effort wasn't based on anyone specifically, but I ended up with a monstrous abomination of a golfer that gives me nightmares.

Your created golfer will have about as much talent and skill as a Tigers day old socks, so it is up to you to train them and develop their skills on the training course. Your golfer has eight attributes; power, power boost, ball striking, driving accuracy, putting, recovery, approach and spin. All can be improved by completing the short mini games where you will face another golfer in a putting competition for example. If you are thinking about training your golfer to max attributes before sending him out to the real world you will have to think again, your attributes are now limited to your experience. To gain experience you will have to play matches, ultimately the capping system only slows your progression through the game.

The team tour which was featured in the PS2 version has now been replaced with the Tiger Challenge mode. Here you will play against fictitious golfers moving on to PGA professionals and eventually Tiger himself. One irritating thing you will notice from the first game is that you can't skip your opponents shot which makes rounds last far longer than you would like. You can skip the preamble up to the shot and then you can fast forward the shot itself.

Once you have completed some training, beaten a few of the players in the Tiger Woods Challenge you may feel like more of a challenge in a PGA Tour Season which offers more of a challenge than ever before. Unless you have completed some training and Tiger Challenge games your player really wont have a chance in hell of getting anywhere in the four day tournaments. It would have been nice to select the length of the tournament but it's not to be.

Tiger Woods PGA Tour 2007 game play is quite different to the other games in the series. The swing uses the same tried and tested method of pulling back and then pushing forward on the analogue stick. You can draw or fade the shot by moving the stick down to the left and up to the right and visa versa. The right stick is used to decide where you want to hit the ball, low down to add loft and backspin or higher up to keep the ball low and add top spin. If you feel you might need a little extra power to make a shot you can press the L1 or X button during the swing, to add some spin you tap the same buttons quickly in conjunction with the directional stick for the spin direction.

One of the biggest changes is the new True Aiming system which replaces the cursor which would show exactly where you ball would land with a circle that covers a far larger area. If you take a good shot the ball will land somewhere within the circle. If you miss-hit the ball you will end up in some serious trouble. Apart from making Tiger Woods PGA Tour 07 more difficult the true aiming system makes it far more realistic.

The controls for the putting are virtually the same as they are for the driving game. You put with the left analogue stick and can add a touch more power by hitting the top of the ball or a touch softer by hitting the bottom of the ball. You will notice that the put cam has now gone and been replaced with a grid system laid over the green. White dots move down the lines at different speeds showing the speed and lie of the green. Without the putting cam long puts are quite difficult and require careful reading of the green, but long puts are still possible, you won't be able to do them on every hole now. If you really can't do without the put cam you can bring it back in the game options or it is on as default on the easy game difficulty setting.

As you would expect on a next generation system the golf courses look much better than ever before. Some of the best bits in Tiger Woods PGA Tour 07 are the small touches of detail like the birds flying over head or spectators falling to the ground as they get hit by the ball in a bodged shot. The grass could look better, but on the whole it's pretty good. The spectators are ok, but most are blatantly stuck to the ground and don't make any effort to get out of the way of your ball.

Tiger Woods PGA Tour 07 sounds pretty good too, although there isn't much to get excited about. The crowds are lively enough and sound realistic, especially when you make a great shot. The commentary is good but again nothing to write home about, although their comments and observations are generally accurate. The ambient noises for me are the one which add character to the game, such as the aircraft flying over head and the birds chirping in the background; on some courses you hear the sea.

The changes made on the PS3 Tiger Woods PGA Tour 07 have definitely been made for the better and also make the game more realistic and challenging in the process. Graphically everything looks better than it ever has done, but you would expect that from the next gen consoles, but not everything looks as super slick a shiny, there are ugly warts that pop out from time to time.
That said I have to say Tiger Woods PGA Tour 07 on the PlayStation 3 (Xbox 360) is the best golf game on the market.