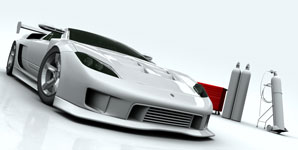 The last version of the Ridge Racer series I played was the PSP version and I thoroughly enjoyed it. However, the last release of Ridge Racer was version 6 which was released on the Xbox 360. Playstation 3 has also been released (as are all Sony consoles) with a new version of Ridge Racer. The drift style of racing is unique to the series, while everyone else strives for realistic handling you can always depend on Ridge Racer for an authentic and fun arcade experience.

It's worth mentioning from the start that most of the tracks in Ridge Racer 7 are the same as those in version 6 on the 360. But I doubt this will cause much of a problem for the Sony faithful as anyone looking to buy this game will have held out for the PS3 or bought both consoles, but not necessarily bought the 360 version of the game and held out for the PS3 version. Whatever the case Ridge Racer 7 has quite a few immediately noticeable changes such as slipstreaming and car customisation which will give players of Ridge Racer 6 something new, but you may get a feeling of déjà vu. For everyone else it's a great new addition to the Ridge Racer family.

If for some reason you have never played Ridge Racer before you may find the handling completely uncontrollable or very old fashioned as the game insists on a certain style of driving, take your foot off the gas, turn into the corner, put your foot on the gas and drift through the corner. If you make the slightest mistake in timing or have your car pointing slightly out of direction on the way out of the corner you are likely to end in a spin or just find yourself sliding hopelessly all over the track.

Cars come in a number of different guises. For the beginner there are the cars with mild drift, they are pretty well stuck to the road and don't take too much control to get them back on the straight and narrow. On the other end of the scale are the dynamic drift cars which turn in incredibly quickly and require more skill to bring the car out of the slide. These cars can even catch out the best of Ridge Racer drivers at times.

Drifting has a very good side effect, so long as you drift at high speed your boost meter will start to fill up. There are three levels of boost, you can choose to use the boost straight away or save up for a double or triple. Ridge Racer 7's new trick is slip streaming which is very effective and can help you spread out those boosts. To slip stream you have to get right behind another car (this can be from quite a distance initially) you will start to accelerate faster and get a higher top speed. The closer you get to the car in front of you, the more effective the slip stream becomes and the faster you will go.

A new addition to Ridge Racer 7 is the customisation of cars. Now you can take your car and buy a whole host of extras to improve its performance. Body kits make your car look good, engine upgrades increase top speed, nitrous upgrades changes the way your nitrous meter works. Other upgrades that relate to the cars handling such as tyres and suspension don't have such an effect and can be left out.

The Ridge State Gran Prix is the main mode. Here you will have to try out for a team. First you will be offered a number of try outs, then go for the one you would most like to drive for and try to finish first. Once accepted you will be given a car. Now you have to establish relationships with parts makers. To do this you need you take part in the races and start winning events, as you progress you will unlock races that will unlock the ability to buy new car parts. Then you need to start trying to use a specific maker's parts and earn points with them. These points can be used for discount on the additional parts.

In usual Ridge Racer fashion the number of tracks available is fairly limited, but by Ridge Racer standards it's pretty good at 21. To stretch the number all tracks are available in reverse which is a given for Ridge Racer. The real longevity comes with the online game which supports up to 14 players.

Graphically Ridge Racer isn't a slouch by any means but it is best viewed in HD, where as MotorStorm looks fantastic in both standard and hi def formats. You can expect a similar look to Ridge Racer 6 on the 360 except the PS3's graphics are sharper and clearer. Best view in the house is the in car view, the worst is probably the replay as you see cars move in an unnatural and awkward way around corners.

Ridge Racer 7 is another great addition to the family and the first "proper" racing game for the PS3. At the end of the day it is another Ridge Racer that has been overhauled for another console release, it's not perfect but it is fun and a great pick up and play game. A great formula and surely the reason it has kept going for all these years.