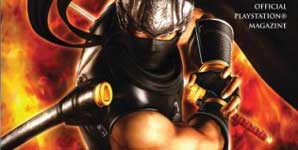 Ninja Gaiden Sigma is the third instalment of this series and the first on the new generation platforms. You generally control the lead character of Ryu who is tasked with retrieving the stolen Dark Dragon Blade by his clan of neighbourhood Ninja's. Your task is to jump, hack, prod and slice your way through nineteen different missions in order to return the blade to its rightful owners.

The best part of the title by far is the fluidity and responsiveness of Ryu. You can jump, hang and slice as if in real time and the characters responses are almost in sync. As you progress through the game you can acquire new weapons moves and as well as upgrading current weapons and techniques. You can run up walls, leap great heights and traverse cheeky overhangs. The all around depth of movements are excellent. Never is this more apparent (and the complexity you will not quite appreciate up until this point.) than when the character you control is no longer Ryu, but the Valkyrie-esque Rachel. The plus points, a scantily clad and heavily endowed woman with a mind of her own, could also be limiting as perhaps that is why our other halves have an instant reluctance to pick up a joypad [she certainly made some derogatory comment, but it might have been about me... Nah, it must have been Rachel.] One thing I do know is that she is bloody cumbersome and about as reactive as clay and this really slams home how responsive Ryu is. One major criticism of mine is that for a ninja game, it is all hack, slice, jump. There is a distinctive lack of stealth to the proceeding which I generally would expect of Ninja's.

In term of game progression, Ryu will collect different coloured orbs having slain his enemies and the colour will reflect the level of currency or health. Slaying enemies can be achieved via differing moves that you pick from your main weapon [these can be your ninja blades or something similar such as nun-chucks or, initially at least, the Dragon Blade], you can also use the legendary Shuriken [Ninja death stars to the non-initiated] or finally your `ninpo'. Magic if you will. This could be fireballs, lightening bolts, tornado's and the like but they are controlled by shaking the six-axis which actually proves to be a pain in the backside. The amount or orbs you collect directly affect the upgrades that you afford and convenient placed mystical shops.

So what about game modes I hear you mutter? I've just told you about it. There is no multi-player action and the online facility consists of a mere scoreboard. HD? Yes, the game accommodates 1080dpi and whilst you can tell it doesn't hit the spot square on and is most apparent in the cut scenes rather than the interactive action.

Even I am getting bored with how repetitive my reviews are sounding these days. I think what I am waiting for is a title that picks me, chucks me against a wall, slaps me round the chops and says "here you go, here's what all the fuss was about." Ninja Gaiden Sigma is a good game, has excellent playability, decent longevity, looks well and has a very good frame rate. But it is still only slightly a slightly better experience than the previous generation consoles in almost every area from playability to graphics. This just isn't filling me with enthusiasm about what titles are around the corner. I have seen many different opinions that gush about this title and it makes me wonder whether I am just too cynical and the game is the best thing since sliced bread (really, couldn't whoever came up with this phrase think of a better invention than sliced bread?) and that I just cannot see it. Of course the alternative is that they just want the other side of the fence to believe otherwise. I'll let you decide as this Sony/Microsoft feud between consumers is boring me now.