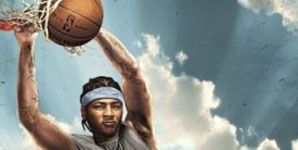 NBA Street Homecourt is the fourth offering in EA's NBA Street series. Based on the streets and on a 3-on-3 adaptation of basketball, NBA Street offers the core elements of what you would expect from an EA Street title - end to end action, tricks galore, point after point and a view of the sport through rose tinted spectacles.

NBA Street Homecourt takes the real world stars (both NBA & WNBA), mixes them with talent that could have made it but for whatever reason never turned pro and sets them against each other on their home courts. I should say that this is definitely not a game for the basketball purist. If you would get annoyed that the ball cannot leave play (the edges of the court have some kind of ball repelling force field around them); if your blood would boil at the 100% lack of any foul calls; or if you would be reaching for the anti-depressants as your cries of "goal-tending" go ignored, then perhaps you should leave this one be. What this makes for is a frantic game where the action moves from end-to-end, rarely letting up.

Your first foray into the main menu will give you obligatory exhibition mode (supporting up to 4 players), as well as your options for basic online gameplay (1-on-1 against those online) and in game settings. However, your main option is the 'Homecourt Challenge' where your aim is to make a name for yourself and your team, by gaining respect and increasing your skill to progress from your hometown in an attempt to become a legend. Along the way you will recruit new team members (the more you progress the better players you can recruit - but beware you have to keep them happy!), get offered better gear that boosts your points to level up quicker, play head to head matches of dunks only, shots only and tournaments to name but a few options. All of this set to natty laid back soundtrack, a variety of cut scenes with voice-overs from street-ballers and a whole bunch of courts to unlock.

As always with EA Sports titles, to enter into the 'Homecourt Challenge', you will have to create a baler from scratch. This option is unusually basic for EA as you can only create your looks by merging the facial characteristics of 3 other players from the game. After this, you pick your position & style and you are pretty much done. Moving on to game itself and this all about the style in which you can win. Style ultimately helps you win games as your use a variety of tricks to increase your game breaker meter. When the meter is full, break out the moves to increase your score on a multiplier basis whilst reducing your opponents total simultaneously. But be warned through a combination of steals and all out assault game-breaker possession can be tuned over. The game contains a variety of dunks with the more spectacular dunks being performed the longer you hold the dunk button. Your prize, should you time it correctly, is a spectacular double dunk that will earn you double points. The trap however, is that hold the button down too long and it will all go horribly wrong.

Whilst NBA Street Homecourt probably doesn't take advantage of its 1080i HD definition in definitely looks well. This comes across more subtly than in-your-face but the way game has been made to look definitely adds to the street feel. The gameplay has some drawback in single player mode with the AI being slightly questionable and it being very difficult to recruit in any difficulty above 'easy' in the Homecourt Challenge making the early exchanges seem like a hard slog. You could also call into question the longevity of the Homecourt Challenge itself.

All in all, NBA Street Homecourt is a thoroughly enjoyable title to dip into, whilst the fact that it allows for up to 4 offline players means that is a title to keep for in-house challenges. It is certainly not a game for the basketball purist and it does have its flaws, but it is engaging nonetheless and even if you get a bit bored after a bit of continuous play, the chances are that you will be returning for some more action before long.