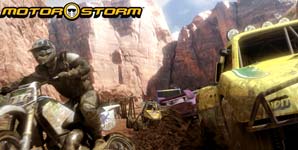 Paris Dakar meets Mad Max meets Demolition Derby is probably the best way to describe what MotorStorm is all about. If you don't know anything about the Paris Dakar you should look it up now. In a nut shell it's a whole variety of vehicles ranging in size from a motor bike to gargantuan trucks tearing through the dessert attempting to cross the finish line first.

Certainly one of the most anticipated releases for the Sony Playstation 3 probably in no small part due to the way it looks. It demonstrates what the PS3 is capable of even in these early days of development and I have to say it looks awesome, certainly the best next generation game I have seen graphically.

MotorStorm's concept is a great number of different types of vehicles racing around huge areas of dessert with a spattering of dirt and mud. All the tracks feature a multitude of different routes; some favour the larger vehicles while others favour the smaller vehicles like the bikes and ATV's. In simple terms, higher ground is good for the smaller vehicles which cope best with fairly smooth ground and large jumps and drops, while the lowest and usually muddiest routes favour the largest vehicles.

The ability to finely tune the route you take for your vehicle adds another dimension to the racing. Generally its easier to use the larger vehicles to start with as they are best suited to the lowest areas of the course, you don't have to worry about falling off the edge of the road, whereas racing along a narrow ridge in a fast vehicle requires far more skill. You are not penalised heavily for falling off, you may just get slowed down by the mud, but at the next available opportunity you will be able to make your way up to higher ground again.

As if this wasn't enough to be dealing with you will have to negotiate your competitors as they try to ram you off the road. You've really got to stay clear of the big trucks that will act first and ask questions later. You have to be a bit more careful with the small more delicate cars and bikes, if you ram someone too hard you will not just make their vehicle a wreck, you will also wreck your own and risk turn into a huge fireball.

The last thing worth mentioning is the boost. MotorStorm deals with boost in a slightly different way to most games. The boost is always available, but if you boost too much and force the boost meter into the red you run a very high risk of blowing up your engine. There are sections of all tracks where the boost will be more advantageous than others, by the time you have been through the most technical areas of a track your boost meter will have dropped right back to normal. Of course there are some tracks where you would boost all the time, if you could.

MotorStorm is graphically the most impressive console game I have ever seen running. Usually when consoles are released the standard of graphics is pretty shabby, for a first effort MotorStorm lets you see what is possible on the PS3 and only makes you think of what games will be looking like 12 months down the road when programmers are more comfortable with the PS3 architecture.

However, MotorStorm is not without problems. The frame rate has a tendency to dip slightly when the action gets particularly crowded, this is probably why split screen racing have been omitted from the menu. You do get the kind of nasty texture appear or very occasionally a small black hole. This doesn't have an effect the game play at all, and any minor blemish is only visible for a fraction of a second.

The rest of the game looks stunning throughout. The vehicles have a massive amount of detail and even the drivers are extremely well detailed even though you don't see them most of the time, unless you select motor bike or ATV to use. Even more stunning than the vehicles themselves are the crashes and the way cars and bikes explode on impact with standing obstacles. Each crash and explosion is totally unique, but for me one the most amazing effects is the fire, it's so realistic in opaqueness, movement and colour. If you have a crash with less force you will see damage from bent axles, to deformed bumpers and chipped paint. By the end of the race your car will be hardly recognisable due to the huge amount of dirt collected on every inch of the bodywork.

While the tracks aren't quiet as exciting to look at as the vehicles they are impressive all the same. The background scenery is like a photographic masterpiece, but what makes the tracks so realistic are all the colourful lighting effects. When you drive through the mud you will leave tracks which will glisten in the sun light through the smog like dust storm left by the rest of the field. Wherever you look you will see something new and beautiful looking.

Sound is pretty good, personally I think they could have given the vehicles a slightly louder and rougher note but they sound great all the same. The smashing, crunching and booming noises are all very realistic and put you right in the action. Motorstorm features lots of heavy rock music from the likes or Nirvana, Slipknot, Wolfmother and Queens of the Stone Age.

For me MotorStorm was a great surprise, it looks far better than I ever thought it would, it plays far better than I expected and it's a great "pick up and play" game that we don't see enough of these days. If you want another game for your PS3 this definitely should be it if you haven't already got it, as in my opinion it is one of the must own games for the PS3 along with Resistance.