Read our review of Metal Gear Solid 4: Guns of the Patriots on the Sony PS3 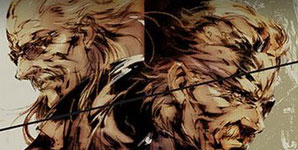 The long awaited Metal Gear Solid 4 is here, so you can stop waiting. Billed as the reason to buy a PS3, Guns of the Patriots has a lot to live up to. Can Mr Kojima do it again, or is the fourth instalment a bridge too far?

MGS4 is set in the futuristic war zones of 2014 (5 years on from MSG2) where war isn't about beliefs or territory any more; rather it is big business for private military contractors. So big business in fact, the without war the world economy would collapse in an instant. Your world is seen through the eyes of an aging, battle-weary Solid Snake (Solid Snake, it's the fourth time out and many years on but it still makes me chuckle.childish, but I just don't care), who is now suffering for a terminal age degenerative disease and is equipped with a camouflage suit that blends in with his surroundings to make him even stealthier, an annoying little robot the follows him about giving him reconnaissance information, a funky electronic eye-patch that allows him to receive this information and an obligatory 70's porn star 'tache.

The end result is the Metal Gear solid that we all know and love - the same feel, the same foibles, the same weird sense of humour (fellow soldiers getting a sudden onset of diarrhoea during a fire-fight is a pretty weird thing to find in a game.) However the game has more an 'epic' feel it to it with it being the (supposed) last instalment from Hideo Kojima in the Solid Snake story. Always fully complemented with plot twists and surprises (granted, not always comprehensible ones) to keep you on your toes, MGS4 takes this to the extreme with more unpredictability than ever before. Old friends and foes return and pop up quite regularly (Raiden, Ocelot, Meryl, and so on.) The game play remains the same with the aim being for you to drift ghostlike around the battle-zone, so stealthily no-one ever knows you are there until your throat is slit. however if you are anything like me this will go ever so badly wrong and erupt into a dog fight time after time.

The game mechanics are as brilliant as the graphics, with even more interactive environment characters to give your position away to the enemy, an example being some randomly placed and easily startled chickens. MGS4 is beautifully presented and there has obviously been a lot of attention to detail paid to the way the game looks. The sound remains the main constant, with the eternally annoying noises of surprise & curiosity still in place from previous titles. Speaking of the annoying, the cut scenes that explain the storyline seem to have got even longer which, in my opinion, are bloody annoying and quite boring at times.

Minor gripes, aside Metal Gear solid 4 is a must own title for the PS3. It looks awesome, the gameplay is as you remember it but in a much interactive environment with some very nice additions such as an iPod and a Playboy in your possessions. Not as lethal as an assault rifle, but fun nonetheless.