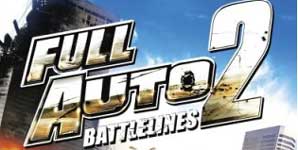 As seems to be the norm at the moment, titles that were released for the launch of the PSP are seeing sequels at large for the release of the PS3. Would the Full Auto franchise fall into the trap of rushing the sequel to coincide with the launch date or have they planned it to perfection?

Put simply, FA2 is pure unadulterated carnage. But what would you expect from cars with guns? Basically you have high powered cars (and trucks and anything with wheels as long as its fast!) equipped with a combination of weapons of mass destruction. Your goal? Either to be the first across the finish line, by hook or by crook, or to be the last man/car standing. Destruction is often the key as most tracks/arena's feature an environment that can be manipulated in such a way as to massively alter driving conditions. Oil drums, shopping carts or manipulated mechanisms can all be tampered with or exploded to stop the competition dead in their tracks. Oh,. all at breakneck speed and on a variety of tracks and environments.

In the single player mission mode you take orders from a computer program called SAGE (this will have all you accountants running scared.) that needs your help to defeat various gangs that are terrorising various regions of the City. Each region has to be won separately and will involve a variety of missions (usually involving racing or destruction) that increase in difficulty as you progress. The further you progress in the game, the more vehicles (all customisable) and weapons you will unlock to be used elsewhere. The storyline is questionable, but I have to say that it's not really what the games about. There is also an "unwreck" feature that allows you to reverse time, if you have been involved in an accident that has resulted in you losing the lead, in order to correct your mistake. The controls are a mixed bag, some work well (specifically the steering) though the braking system is quite annoying with no seeming consistency or much effectiveness.

The game looks pretty good with a very impressive frame rate to say the racing is extremely quick to say the least, Almost as impressive, when compared to other PS3 launch titles that do not include this feature, is the spilt screen off line multiplayer which slows the frame rate slightly but not to such a degree where it spoils the experience. FA2 also features a HD compatibility up to 1080i and whilst the game looks okay probably doesn't take full advantage of this. The sound is okay and accurately reflects cars rebounding off each other and exploding at every other opportunity. This is coupled with an impressive heavy metal sound track from the likes of Megadeath and Wolfmother.

Multiplayer activity is both offline and online. I have touched on the 2 player offline functionality and the online game is for up to 8 racers. Game modes include six different options for carnage including straight up racing, deathmatches and base assaults.

Those wanting anything thought provoking or multi-dimensional are probably wasting their time with Full Auto 2: Battlelines. Those wanting carnage, speed, destruction and something that is just a lot of fun to pick up and play, especially in multi-player mode, will be pleasantly surprised. There are no specific flaws to the game that seem to be based on rushing of the release and Full Auto 2 should be judged on what it is rather than what people may want it to be.