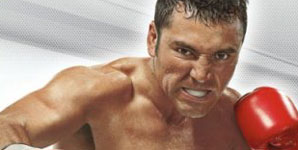 For anyone who has yet to be introduced to the Fight Night series, it is the only simulation style boxing game on the market. Driven by the Total Punch Control system this uses the left analogue stick for punching and the right for movement. You can throw jabs by tapping the stick forwards to the left or right depending on which fist you want to use. Hooks are thrown by moving the stick in a quarter circular between 9 and 12 or 12 and 3 o'clock positions. An uppercut requires a third of a circular movement. For more powerful punches like the haymaker and KO punches you will need to move the stick even further around.

The impact punches, which are the most powerful in the game like the haymaker and KO punches will drain your opponent's energy immediately enabling you to go for a quick knockdown. There is also a stun punch which triggers a mini game in which the view is reversed, you are seeing through the eyes of the opponent as you pummel him in the head. All these punches are difficult to pull off mainly because these punches have a long windup time which is easily countered or blocked by the opponent. This is a good thing though as winning a bout would be more a question of who could pull the impact punch first, as it is, it keeps the game well balanced.

Winning a game can come down to the simple matter of throwing more punches than your opponent. It helps tremendously if you defend yourself once in a while. You can block and parry punches using the R1 button while the right analogue stick is used to control which areas of the head or body you want to cover. A successful block or parry enables you to quickly come back at your opponent with a barrage of punches. It's very easy to suddenly switch from a defensive position and launch an attack in this way. If you need a bit of a rest soaking up a kicking you can press the L1 button to hold your ground and avoid punches or you can lean on your opponent to get your breath back.

Fight Night Round 3 has all of the mini games from past episodes such as the pre match training and cut man in the ring between rounds. Each of these are optional but if you do choose to take part you will have to choose from one of three workouts depending on which area of your game you want to sharpen. They consist of the punch bag, weights and a combo dummy. All the games are about timing and pattern recognition and you won't have a problem meeting the required level to benefit. Once you are in the ring you can play the cut man mini game. A small icon will appear at the bottom of the screen, you have to move the analogue stick in time with the icon to heal your fighter. If you do the job badly he won't be able to see properly or the ref may stop the fight because of the unattended cuts.

The PlayStation 3 has a new mode called "get in the ring"; this is essentially the same as the instant play mode but you will see from the boxer's eyes, a first person perspective. You see everything your boxer is seeing, if you get battered with a load of punches in the face you vision will become blurry around the edges as your boxers face begins to swell. Once you are used to the new view you should be able to duck, dive, bob and weave with ease. If you really like the new perspective you can play all the other modes in the same view.

The career mode returns but not with a couple of changes. Basically all the structure from previous games has been removed. You no longer get a rating within the top 50 when you go pro, now you just have a popularity meter, once it's full you will qualify for a special sponsored or title fight. The basic structure of the game is still there however you will sign contracts one by one, train in one of three mini games as mentioned above and then fight. As the structured progression has been removed you never really feel like you are going anywhere, whereas you should feel like you're striving to become the champion.

Fight Night Round 3 is a great looking game, its all about the fighter models. There are no meters of any kind these days and for good reason, you can see from your opponent's expressions how tiered, battered and bruised he is, you will know when he is ready to drop. The close up replays of knock outs are incredible as you see the face skew and shock waves run away from the glove, fantastic visuals. The detail the PS3 gives is incredible but the backgrounds are a bit too "cardboard cut out" like, it's unfortunate because it dulls the games high sheen elsewhere.

Basically Fight Night Round 3 comes with no surprises, well maybe one which is the first person perspective but the core of the game hasn't changed. While the first person perspective it a great addition to the game it doesn't really improve the game at all. Hopefully the first person view will make it back in forthcoming versions as I thought it stepped things up a level and came even closer to what you see on the TV. However, if you own Fight Night Round 3 on 360 it is probably not enough to warrant purchasing it again on the PS3. If you don't have a copy of the game elsewhere you should definitely pick it up, especially if you're a boxing fan or even just slightly interested for that matter.