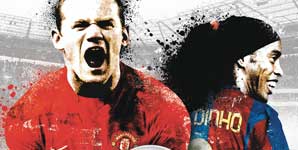 EA's FIFA titles have always been within the top two of footballing simulations on the market and rightly so. They have always looked as well as anything else on the market and FIFA as well as some considerable financial clout behind the titles, they have always and the right to all the players names, clubs, sponsors and grounds. The games have generally been slickly put together with the odd flicker in frame rate. In my opinion their main flaw, time after time, has always been that feeling that you get when you ask yourself "Am I totally in control here?" FIFA 08 is the first outing on the next generation hardware. So, what are we in for?

I'll start from the beginning. Remember the temporary boredom that set in during the loading menu or waiting for a game to start? Well forget that, now the power of the next generation consoles means that you can have a game load whilst you practice pot shots at goal with Ronaldinho. Maybe I'm easily pleased but I thought this was a cracking touch and one that I think will become industry standard in the future. The FIFA soundtrack is back and as good as ever with a new list of artists and tracks. On to the main menu and finally everything seems to be in one place. I have often felt that FIFA holds back a lot of modes for its later re-releases of the same game spruced up for the Champion League or something similar but everything seems to be on that main menu, be it exhibition, scenario, online, manager mode, tournament & league creation to name but a few. This said they don't make it easy for you to create a World Cup or Euro Championships, but seeing as Signor McLaren has seen to it that we will probably not be there I will ignore this as a criticism.

What about the gameplay itself then? Well it looks better than ever. Players resemble their real world counterparts more realistically than ever, the commentary by Martin Tyler & Andy Gray is more in-depth, realistic and intelligent than ever (ie it takes a lot longer for it to become annoying!), the crowd noises are more realistic and seem to react to the game and the frame rate is superb and never flickers. The new ball striking physics make shooting more realistic and you feel that you have to put some real effort into getting it right as standard elements such as power now have to be considered alongside trajectory, positioning and spin to get the shot right. Having been gushing in my praise so far, here comes the 'buts'. Firstly, if you hold down X long enough you will win the ball. Handy, but it doesn't make you work for it. This means that not do you not enjoy winning the ball you are not particularly careful with your possession. Also, my main criticism of past titles, whilst slightly diminished, still holds up now especially in close quarters. It is the little delay between your pressing of the button and your man actioning the order. It is the difference between a smooth tackle or a horrendous foul. The difference between a wonderful through-ball played majestically through the eye of a needle or a crap arsed pass straight to the centre half. You still don't feel totally the master of your own destiny.

This aside, FIFA 08 takes the online element to a whole new level. Not only is the online play as smooth as the offline action, FIFA has joined up with ESPN Soccernet and playing offline or online as long as you are connected t'internet you can get real time football news, check out player profiles & stats or update your database following the transfer window. This is pretty much spot on.

Don't get me wrong FIFA 08 is a brilliant game, enjoyable and slick with many new treats. However, for me it is spoilt by the one single flaw it has had throughout the last few years and by the fact that it has still not been identified and corrected. This is now truly the only thing holding the FIFA franchise back. Well that and the brain-dead tackling.