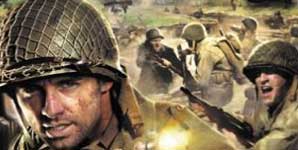 For the launch of the 360 we had Call of Duty 2, a little bit later and for the PS3 launch we have Call of Duty 3. CoD3 takes you through some of the more traumatic battles of World War II during the Normandy breakout campaign for the liberation of Paris. The real question that I was asking myself before I picked up the title was whether I would find anything new here and would it be a worthy upgrade or more of a case of "same old, same old"?

Getting in to the game you will find an experience pretty much akin to the usual Call of Duty environment. The single player campaign mode has you fighting missions from the Normandy breakout campaign with its usual mix of missions and sub missions. There is the odd addition to the game play with the SIXAXIS "tilt" being incorporated to shake of the enemy in hand-to-hand combat or to drive vehicles, and button sequences being introduced in certain situations to reach your goal rather than the usual button mashing. All of which provides new elements to the title and adds to the diversity, whilst reducing the chance of repetitiveness. CoD3 retains no tangible life bar and no vibration feature which means that you have to rely on the visuals to decipher how much of a pounding you are taking. Initially the screen will shake, followed by an impairing of the vision, before a state of a shock takes over (dreadfully impaired vision and a ringing of the ears), finally followed by death. It is up to you at which state you run for cover, but I wouldn't recommend waiting for the latter.

The first thing that you almost form a subconscious opinion these days is how well the title looks. CoD3 is showcased in a 720p HD resolution and does a good job of recreating authentic WWII buildings (be they intact or more akin to rubble), clothes and weapons. Indeed the weapons are as weather-beaten as the troops, which looks well and adds to the authenticity and immersion of the game. As you would expect on a next gen' release extra attention had been paid to details such as explosions, drifting smoke and generally the way that the action affects the environment.

There are a couple of 'buts', however. Firstly something that only becomes really apparent in death. The colours and textures when you really concentrate on them are not as impressive close up as they initially appear to be. It is not something that makes itself apparent early as there is so much going on at once you are just concentrating on dodging bullets. When taking a deep breath after taking some lead to the head however, a few discrepancies relating to shading, lighting (mainly relating to shadows) and colour accuracy and vibrancy will become apparent. Secondly, the frame rate is not as smooth as it might be. It doesn't necessarily hamper the game but you just get the feeling its fighting itself to keep up. I was trying to convince myself that it was just me, but the exclusion of a split screen offline multiplayer would back this theory up.

Moving on to the sound, this is a strong feature for CoD3. Solid voice acting (each character speaking in an authentic accent and language) is coupled with a strong narrative and authentic explosions and gunfire. The sound is all about how well the player gets immersed in the experience and, trust me, if you turn the sound off anyone in the vicinity will think that they are walking in to no mans land.

The online multiplayer option caters for up to 24 gamers where you can choose from a number varying infantry classes from medic to heavy assault whilst getting involved in a number of different games that include team support and capture the flag amongst others.

I am well ware I have focussed on a couple of visual glitches and I think it fair that I mention that the graphics look very well for a title where there is so much going on, on screen, all at once. There is just a nagging voice at the back of my mind that keeps telling me that a bit more time in development would have ironed these slight flaws out. This is backed up by the odd 'bug' in the game, from getting blocked in doorways to slight framing issues that tip you off to a forthcoming enemy ambush.

All in all, CoD3 is an impressive title in itself but one that could have benefited from extra development time to be truly worth a purchase if you own other Call of Duty titles. Whether this is down to rushing out for the PS3 launch is not for me to say but certain elements do point this way. If you haven't found Call of Duty as yet, then this comes highly recommended.