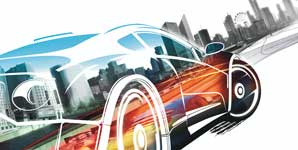 In Burnout Paradise we see an evolutionary step on the Burnout franchise. In place of your standard linear pre defined races, we see `Paradise City', a sprawling urban conurbation just waiting for you to explore it. Think Grand Theft Auto if it was solely about the cars and not the random maiming.

Rather than collecting medals are we saw in previous Burnout titles, the aim of the game is to complete various tasks in order to build up your current driving license before advancing to the next license in due course. Paradise City itself is split up into eight separate sectors of roads, shortcuts, underpasses, bridges and rail tracks and could take a fair while to explore in its entirety. This said, it is worth doing as if you enter into a task or struggle to read the map properly, it is quite easy to make a wrong turning or end of embedded in bridge support. Task over. Your tasks will vary from `Showtime' [a variation of `Crash Mode' from previous Burnout incarnations] which entails you stringing together stunts, jumps and crashes over any course you find and can blast your way through; `Marked Man' [See a variation of Pursuit mode previously] where you attempt to get from point 'a' to point `b' whilst other vehicles do their utmost to derail you; standard races; `Road rage' see you attempting to create as much carnage as possible before your own vehicle and a few others too. You are also responsible for unlocking your own new vehicles, not in the normal manner via attaining a certain level of competition, but by seeing the car drive past you, chasing it and destroying it. This is thoroughly fun and has you changing from wandering nomad to bloodthirsty predator in a split second. If you are one crash away from wiping out or out of nitro, then pop into the repair shop or gas station for a tune up-slash-refill which will have you as good as new.

So how well do the in-games fit into the free roaming environment? Being hyper critical and a fan of previous Burnout titles, whilst the level of destruction is satisfying you don't get the multi car pile ups that you used to get particularly in Crash mode. The pile ups are mainly gone but the linking of stunts and crashes is highly appealing. Maybe I am being slightly nostalgic then, but perhaps there was room for both? On top of this, because the city is theoretically split into three vertical levels [the top level may include highways, bridges, etc whilst the middle tier may be street level, whilst the lower tier could be subways or the like] it can be rather difficult to make head-nor-tail of the map, specifically at high speed. Speaking of high speed, we are talking `uber' velocity with 60 frames per second which is almost flawlessly incorporated into online gaming as well. Having digressed, my last beef is that you will have to wait for any event you start to finish before you can restart it again. This can be particularly frustrating id you wipe out half way through a race meaning that you have little to no chance of winning and you have to travel a couple of miles back to the start line.

Negatives aside, let's have some more things to be positive about. Though about as a appealing as all DJ's, Paradise City's `DJ Attomica' joins you on your car stereo, however in a nice change from the norm he actually gives you some useful hints on gameplay and finding your way around. The online facility is excellent not only because it maintain the frame-rate, not because you can custom race a fair few of your friends online, not because you can also compare stats with your mate, but mainly because the integration of your off-line game and online game is seamless. If you turn on your t'internet connection the stats and links to `friends' online is automatic. As the game is free-roaming, you can challenge and be challenged at any time.

Burnout Paradise has a raw intensity to it that will get your pulse racing, the graphics are top notch and the selection of tunes for your radio, are not annoying as in similar titles. For these reasons as well as for all those mentioned earlier, Burnout Paradise makes it into the slowly growing bang of `must have' PS3 titles.