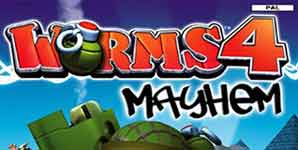 For anyone who has not ventured across the Worms collection before, the basic premise of the game is simple. You control a team of Worms (the invertebrates not a bunch of social malcontents) and your goal? To annihilate an almost identical team of worms with a massive variety of firearms & Weapons of Mass Destruction in a 3-Dimensional environment.

The latest Worms outing from Team17 offers a variety of features new and old. As always you can customise and name your teams in order to name your own heroes and teach your personal enemies a lesson, whilst modelling your army in your own image â be it Cowboy, Disco or Other. Newer features include the ability to customise your own weapons from a variety in built game settings, from creating something new & original to modifying the existing favourites of Banana Bombs, Flying Sheep & Baseball Bats. Personally, I found it quite humorous to launch a tirade of exploding Monkey's Heads at my enemy.

You can choose from three main game modes â Story, Challenge or the ever-popular multi-player. The Story involves your group of Worms starting University under the guidance of the wise Professor Worminkle, who provides you with missions to outwit and punish a squad of arch-rival Worms in a series of increasingly difficult scenarios. Challenge mode offers the opportunity to hone your abilities with each different weapon and Multiplayer option allows you to fight and friend in the most enjoyable aspect of the game. By completing Challenges and venturing further in Story mode, you accumulate points that can be used to unlock new and more exciting weapons, new themes for your team of Worms or new backgrounds and battlefields for hostilities to take place.

Thinking back to the day, the main draw of Worms was its simplicity and quick-fire action on the PC. You could quickly move your Worm around in the allotted time, quickly select your weapon of choice and despatch your enemy in a timely and efficient fashion. I am still not convinced that the new 3-Dimensional format brings much to the game. The extra dimension, coupled with the menu selection and scrolling, as well as the various maps of the landscape that you can access means that there are so many ways that the game can be slowed down without any discernable "action". The lack of any background music does not help.

The game still features a variety of non-deadly tools to use, such as the girders and ninja ropes; however the amount of time you waste falling off girders and planks in the new 3-Dimensional format slows the action further and can be quite cumbersome. During single player modes, there are a variety of cut-scenes that could clue you in to the story in a fraction of the time that they actually take to do so. Furthermore, the loading screen whilst you a waiting for battle to commence takes its time too. (If anyone can tell me what the loading icon is meant to be I would be eternally grateful.)

The game itself has been made to look more "cartoony" and cute, whilst listening to the Worms spout their "Worm language" makes you want to throw things at the TV screen. All very well you may comment for a game that is rated for the ages of 3 and above. I just have a few problems with a game that seems to have tried to incorporate a much younger age range, but involves Napalming your opponent and Suicide Bombing Grannies. Stick to "Old School" Worms.