Urban Chaos sees you take on the mantle of Nick Mason from special unit 'T-Zero' as you attempt to rid the city of the Burners. The game is a first person shooter with a whole host of interesting features but does it stand up well to the competition? 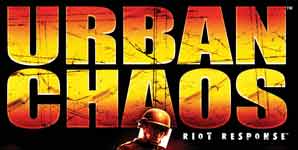 You take on the role of T-Zero operative Nick Mason in a time of civil unrest. T-Zero are a new Special Forces unit created to take on the crazy and destructive Burner gang terrorising the city. The story starts with a live action news report detailing the crime wave in the city and you are immediately thrust into the action. Between each mission these news reports detail your progress and also inform you of further Burner threats and other missions to take on. Overall the story, while nothing revolutionary is well told and keeps you ploughing on through the missions. The news reports are a clever way of progressing the game and also giving you the feeling that it is all happening in real time and adds to the excitement of the game.

Graphics in the game are good, while maybe not quite as polished as those seen in FPS rival Black they are nothing to complain about – action happens thick and fast and slow down is never a problem. Weapons and surrounding all are realistic looking and all fit the setting of the game.

The only minor complaint for me was that many of the enemies look very similar; while this may be because they are all in there gang colours and trademark hockey masks a bit more variation would have added to the game.

The sound effects and music are decent and voice acting, while occasionally cheesy, are all well done – gun effects, explosions and voices all hit the spot. One thing to be aware of is the language in the game is fairly colourful but not used excessively or in there for the sake of it, however parents, you have been warned!!

The game follows the normal objective filled missions structure as per most FPS – objectives ranging from saving hostages, taking out specific gang leaders, clearing building etc. These play out over well designed and varying levels through the city. At various points through the missions you are aided by various members of the other emergency services who all can help in different ways, firemen can break down doors and clear paths through burning buildings, police add some cover fire and medics heal you and any stranded civilians. Again while not particularly revolutionary the fact that you interact and can give orders is a nice touch rather than just picking up a medi pack left in the street.

Another new feature is the riot shield which you have at your disposal – this piece of kit is invaluable as not only does it provide cover but can also be used as a battering ram to barge enemies. The shield really dictates the way you play as it encourages you to turtle and then attack when the enemy reloads thus introducing a strategy element to your play. To be honest it took me a little while to get used to the shield as I kept forgetting it was there – however it is a great idea and addition to the game adding another dimension to the often repeated FPS gameplay.

The main selling point of UC for me is the replayability factor and the bonuses you can accumulate. Each level has a mass of periphery objectives such as specific number of headshots, non-lethal arrests (with the aid of a handy stun-gun), evidence collection etc – and four difficulty levels on which to give it a whirl. This means that you will be revisiting levels numerous times and because of the different objectives you are forced to approach levels in different ways, meaning that replay is in no way repetitive. As you progress medals are earned which reward you with extra weapons, ammo and extra modes – in total there are 204 medals to collect some of which can be extremely challenging!

The game controls well however there are a lot of controls to familiarise yourself with – not only do you have various guns to use and cycle through but also a number of melee weapons such as meat cleavers and Molotov cocktails that can be used to take out the Burners. Sometimes cycling through to the desired weapon can take a while when you are in the thick of the action. Most importantly the aiming and moving are easy to get to grips with meaning you can get into the game straight away.

Urban Chaos is a great game and while not the most revolutionary game does bring some interesting new features to the genre. While not as technically impressive as Black I enjoyed playing Urban Chaos more due to the longevity and variation in the gameplay.

It is well worth a look if you are a FPS fan or enjoy a challenge and want a game that you can get your money's worth from.