Trapt is the fourth instalment of TECMO's Deception series, the first outing for the series on the PS2. In the game your character has the ability to set and unleash traps on the unsuspecting mercenaries sent to hunt her down. The premise of the game is unique but does this make for an enjoyable game or will you feel TRAPT playing it? 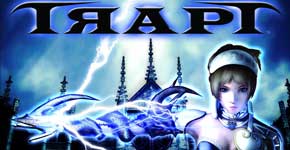 You assume the role of Princess Allura who has been framed for the murder of her father by her evil stepmother Catalina. Allura manages to escape the clutches of the royal guards and flees to a disused mansion. On entering the mansion she is marked by an imprisoned and faceless 'Fiend'. The Fiend empowers Allura with the ability to set a variety of traps to kill anyone who enters in order to feed them his souls; if she doesn't comply the Fiend threatens to kill Allura. A slew of random characters hunting Allura find their way to the house to try to claim the reward on her head.

As you are already aware the story is like something from a bad Disney film and I feel a lot is lost in the translation. The story is told in Japanese with English subtitles however the subtitles are written in very poor English and littered with spelling and grammatical errors. OK this isn't an English class but it is very sloppy that this is the finished product hitting the market. Overall the story is not particularly original or involving and is let down by the poor dialogue.

The graphics in the game are average at best – the character models are decent however the locations are incredibly bland. Some of the trap effects are fun, the first few times they hit, however they quickly become so-so due to a lack of variety and the poor AI of the lumbering enemies.

Playing the game is also hampered by the camera which always seems to be fighting against you – the only view available is a closely zoomed in third person view which makes it difficult to set off the time sensitive traps as you can't see the enemy moving behind you.

The game moves at a very slow speed, Allura and the enemies chasing you appear to be running in treacle – this gets even worse when you set off multiple traps resulting in your PS2 grinding to a halt as the frame-rate seems to dip into single figures. This problem also plagued the PSOne games and it doesn't seem to have been remedied on the PS2.

As stated above the game is voiced in Japanese with English subtitles therefore it is difficult to comment on the voice acting as my understanding of Japanese is nil. Voices seem to fit characters but as previously stated the dialogue is ruined by poor translation.
In game effects all sound a bit clunky and trap effects sound repetitive. Background music, while trying to sound chilling ends up sounding annoying.

Each location you start a round in has 4-5 rooms. Built into each room are location traps ranging from burning brazier, chanderliers, spikes etc. Prior to the round beginning you can set a variety of traps, floor, wall and ceiling traps which include spears, rocks, bombs, beat traps and many more. The key is to place the traps on the floorplan grid to best dispose of the enemy. When the round begins the enemies chase you around the room and you have to guide them into your traps and set them off when needed. To cause big damage and earn big cash you can combo traps to unleash a painful death on the lumbering idiots chasing you. When you pull off a cool combo it is good fun however the traps on offer are pretty limited and although they can be upgraded it is usually a case of upgrading a medium sized rock to a large rock which causes a bit more damage. The main drawback is the poor enemy AI, enemies will follow you around in circles through the same trap over and over until you end up killing them. The game is not overly challenging enemies do not become faster or cleverer just immune to certain types of trap – this seems to be a bit of a cheap way to ramp up the difficulty.
Controls in the game are pretty well done, ceiling, wall and floor traps are each assigned a button and circle lets you pause the game and change/assign the trap types. This is simple and is easy to pick up and play – it's just a pity that everything else seems to be lazily implemented.

Trapt is a unique game on the PS2 and in theory is a fun idea for a game; however the game is poorly executed and is crippled by a number of flaws, as such the game is a chore to play – overall I give TRAPT …………………