Ah the Tennis game; the untapped source of virtual sport entertainment. With many often opting for games like Fifa or the NBA series Tennis games are often left sidelined and ignored. Is this all about to change? 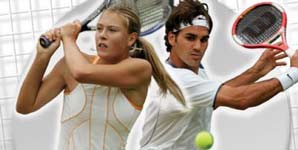 Top Spin bursts onto the PS2 scene after a long lasting stronghold on the Xbox tennis market. The release on PS2 was inevitable but the wait is finally over.

The first giveaway regarding Top Spin is the cover of the game. Dominated by Roger Federer and Maria Sharapova (two of the hottest stars in modern tennis), this game shows it means business. You can obviously be these players in the game and others include Lleyton Hewitt, Sebastian Grosjean, Martina Hingis and Venus Williams. Each player possesses the attributes and skills of the tennis stars and they also move and react in similar ways.

I had high expectations of Top Spin after such a positive response from the Xbox hit; especially after spending several long weeks on Smash Court Tennis Pro Tournament 2 which I thought was excellent. The game modes open to selection are exhibition, career, tournament, online and fine tuning your tennis skills at the Tennis School.

The career mode is actually quite brilliant. With an intuitive layout and a huge selection of customisation options when creating your character (import pictures of yourself from the EyeToy camera for example). There is a wide selection of options once your tennis career has started and each is as good as the last. You can fly to different countries where you can compete in a series of tournaments, from amateur to grand slam depending on your ability. Although the default setting for career matches is 3 games per set and 3 sets maximum that is unrealistic. To increase your stats which are serving, forehand, backhand and volley you have to allocate one of your 14 stars you being with to a training session. If you succeed with training, you gain a star for that ability. The aim is to climb to the top of the rankings ladder until you reach number 1 and obtain the 'legend' status. You can also win and purchase tennis equipment and perform tasks for your chosen sponsor such as hit targets while being recorded for an advert. With a great choice of sponsors (Wilson, Prince, K-Swiss, Adidas) there is no doubting Top Spin has done well to gain the rights for some of the features in the game. Although tournaments are not named to their usual titles e.g. Wimbledon is now The Great Britain Championship but I'm just picking faults.

On-the-court action is decent with a good variety of shots available. The good old fashioned 'chip back and hope for the best' is included. Also there are top spin, slice, drop, lob and risk shots for you to get your teeth into. However drop and risk shots have a moving line you have to let go of in the middle for the shot to be pulled off which makes it unnecessarily complicated and frustrating. Shots are far from realistic as well with the bounce of the ball causing it to sit up for unnatural lengths of time allowing your opponent to dig out unreachable shots from nowhere. This may result in lengthy rallies when competing against tough competition.

There is a great selection of venues and environment to choose from although the graphics do not do the game justice. From long range camera views the players look decent enough but when up close and personal the graphics are poor and there doesn't seem to be a lot of detail. The crowd also look square and not much action happens within the crowd other than the occasional clap or Mexican wave. The sounds in the game are good with the music on the start menu and while loading happening to be quite enjoyable and worthy of a hum. The sounds in the game are also first-rate with realistic grunts from the powerful women and a nice sound when the ball hits the racquet or the ground which is good. Also the commentators have the accent from the venues you are playing in.

Top Spin has good and bad features. There is quite a bit of enjoyment you can squeeze from the game, Career being the most obvious to me. The game play is also pretty good once you've got the controls and tricky shots sussed. A selection of well known players is great and online capabilities are another bonus. However the graphics aren't brilliant, there are ridiculously slow load times and the game is trumped in some departments by other tennis games. The tweaks made to improve the successful Xbox title are worth a look but are not good enough to carry this game to the very top.

If you are looking specifically for a tennis game there are other PS2 titles that outdo Top Spin for sheer enjoyment. Worth a look but try out Smash Court or Virtua Tennis 2 first.