For 8 long years the TOCA series has kept racing fans engrossed with its portrayal of the world of motor sports. TOCA 3 attempts to cater for the hard core driving sim gamer and the arcade adrenalin junkie all in one with a whirlwind tour of multiple motor sport disciplines. 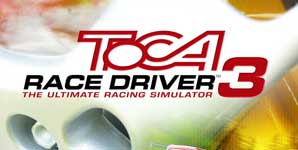 Does TOCA 3 take the chequered flag or is it stuck in the pit lane?? Gentlemen, start your enginesâ¦â¦

You are mentored through the game by your pit guy who gives you the insight into driving lines, each new discipline and the championships that you enter, while story is not really key to this type of game the cut scenes work well an are chock full of helpful hints that are well worth taking on board. This really adds to the presentation of the game and makes you realise that this is a high quality game.

To be honest I was a little disappointed by the in game graphics, while the cars all look like their real life counterparts they don't wow you like in some of the other driving games on the market. Also whilst the track are all modelled on real life circuits and have many recognisable features such as the dreaded corkscrew at Laguna Seca the background and grandstands at these world famous circuits appear sparse, in some ways this allows you to fully concentrate on the in game action however TOCA 3 is not the prettiest game on the market.

The cars all sound realistic and in a race the sounds make you feel like you are in the middle of the action. The voiceovers in the cut scenes are also good â It is great to hear real Brits in a game rather than phoney accents.

The gameplay/controls may split the racing game fans down the middle â don't get me wrong TOCA 3 has a great physics engine it's just that some may find it drives too much like a simulation for their tastes. You have to plan your driving, being too aggressive will result in you leaving the track and usually finishing out of the money â getting your speed right and taking the right line are key to being successful, also adapting your driving style depending on the vehicle that you are driving is also essential â while Mitsubishi Evos have tons of grip and hang on round most corners, the open road buggies can be a pain to get to grips with. TOCA demands patience and rewards realistic, sensible driving â this doesn't mean you can't be aggressive, you just can't be reckless. While I enjoyed learning the game it does require patience which may not be what everyone is looking for.
The game features a fantastic damage engine whereby your car's performance will be affected by the paces that you put it through â again this limits the amount of collisions you can get away with as you can lose top speed, acceleration and even a gear.
The amount of motor sports on offer is huge and varied including GT, Touring cars, Historic, Open Wheel, Rally and Oval. You can play through either a Pro career or World Tour modes which both focus on different aspects of the racing world and give you a flavour for all of the disciplines on offer.
Controls in the game are standard racing fare, however as stated above it is the handling rather than the controls that you will have to get to grips with.

Overall TOCA 3 is a well presented, well executed racing game filled to the brim with races to take part in and cars to throw round the many tracks. The game leans more towards simulation than arcade racer and some may find the handling initially frustrating however with perseverance you will find a great game. Fans of Gran Turismo and motor sport will be in their element with the sheer depth that the game offers.