Lucas Arts latest release to the gaming world from the Star Wars franchise is a first person shooter with an abundant supply of action. For any Star Wars fan out there this game will let them fulfil many fantasies about what they would love to do a long time ago in a galaxy far, far away. 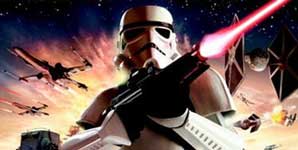 The fully evolved single player story mode has been drastically improved from Battlefront 1 and now boasts a massive selection of missions based around the 'Revenge of the Sith' movie. You follow the 501st legion of the clone army around the galaxy as they set about wiping out the droid armies on behalf of Chancellor Palpatine. There's a cinematic intro to each planet which relates directly to a scene from the movie Star Wars III, this certainly gets you geared up for the forthcoming frantic battle you are about to be emerged into. Its not all footsoldier based as there are several levels where you'll be zipping around space in an X-wing or Tie-Fighter in a battling flight sim-mode. There are several craft to experiment with and a variety of mission styles which make a refreshing change, and not just in a 'filler' kind of way, they warrant there own levels thanks to fine development. Dodging homing missiles and lasers before landing inside an enemy ship and then shooting your way through to an engine room to lay explosives before shooting your way back out and flying out to destroy an outer part of the ship is an adrenaline-fueled experience. Chapter 1 in the book 'What heroes doâ¦'

The amount of activity is staggering but at times it is also a little overwhelming and you can get a little dizzy and confused when you don't know who's knocking you down with laser blasts. Its like the opposite to a Metal Gear mission as stealth counts for nothing, mainly because you can't be discreet against hundreds of persistent droids and countless powerful tanks swarming all around you with the sole aim of purifying you back into the test tube you were created from. But its not all random firing and running into a battle without a purpose. There's a multitude of clones each with their own specialist skill that need to be used wisely to be successful. With a choice between sharpshooters, engineers, Jet-packed troopers plus many others to easily switch between it all depends on what you intend to do at the specific moment of the battle. As well as a choice of foot-soldiers there is also a selection of vehicles you can take command of to inflict some heavy damage. Basically there's more ways of getting involved in the war than you can shake an Ewok at. With so much depth it makes it more than just your average 1st person shooter game; even if it does take a bit of time to get to grips with who is the best clone for the job on each level.

The control's are a little complicated and you need to be on your toes flicking between movement and targeting views in the middle of a battlefield, otherwise you'll have 2 droids standing beside you giving you a pasting whilst your busy trying to get one in your sights. The majority of the levels involve you leading the charge and capturing control-points so you don't need to try and kill every evil robot you come across. And if you did, you'll soon find that your comrades are slowly depleting in numbers and you'll end up defeated. But on the other hand, there are pages and pages of stats you can rack up to improve your profile, so it's worth finding a good balance of kicking ass and progressing with the mission.

As there are so many controls to learn for each clone, Jedi and craft its definitely worth spending a good bit of time training with them before getting stuck into the meat of the story. It's a lot more satisfying when you can get the most out of them rather than landing lucky pot-shots.

The graphics and sound are spot on, they've done a great job of getting them as close to the movies as possible so you won't be disappointed if you're a fan. The camera angles do get a bit awkward at times and it can frustrate you but once again it's something that gets easier with time, so with a little patience you'll be rewarded. One gripe is the sudden appearing and disappearing of enemies as they are born or killed off. It takes away something from all the hard work that has been done to create a very realistic fantasy battle zone. The numerous environments you battle in have been accurately designed and add a great deal of diversity between levels.

There's so much to get involved with in this game it will provide hours of galactic entertainment and its not always an easy haul so be prepared for upsets along the way. The fact that you need to be more strategic with your attacks means the game will appeal to more than just a 1st person shooter fans. And to be honest if you're fond of just running along and destroying in an arcade-style you won't be as successful and invariably you won't get as much satisfaction from the game. It does get a bit messy when it appears there's just a pile of carnage happening and your not sure who you should be shooting at (you can 'accidentally' kill your own men/Wookies/etc.) but with a bit of composure and a few minor successes under the belt, you'll be hooked.

Star Wars is always a big seller because its one of the greatest stories of our generation, but this game actually lives up to expectations and Lucas Arts have produced something worthy of the name. It's about time.