Soul Calibur is probably one of the most legendry fighting games that has ever been, Street Fighter II being probably the most legendry. Starting off life in the arcades some 10 years ago or so Soul Edge (as it was known then) was the little brother of the Tekken series. The main difference, each character had a weapon. Then a little later on the Dreamcast had a game arrive called Soul Calibur which featured amazing game play and graphics. It was widely regarded as the king of all beat em up games. Now we are on the third version of the series which is much the same as the previous two games, a few new characters have been added, some original characters have new moves and the game play has been tweaked. Soul Calibur III also features a whole host of new modes outside the core game which don't really add much to the game. 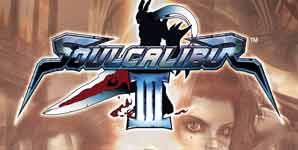 Soul Calibur III has three completely new characters added to the roster which now takes the number of fighters up to somewhere in the region of 30. Only half of these characters will be available from the outset of the game. The new characters fit in to the cast very well. Tira is a new female fighter and she fights with a very strange weapon called a Weider which looks something like a very sharp hula hoop. The moves seem to follow those you might have seen in the Olympics is the hula hoop gym routine. Basically lots of spinning and twirls. Secondly there is Zasalamel who is a muscular bloke that carries a scythe. The attraction to playing Zasalamel is his long reach. The final new fighter is Setuska who is a Japanese woman that sports a parasol; this parasol is far more sinister than the usual sun shade. Setuska's parasol has a hidden blade within which is great for quick cuts and slashes. These new characters all sport a full compliment of moves but they don't feel and well developed or highly polished as the current fighters.

As before there are four different buttons, horizontal and vertical slash, kick and guard. Special moves are made up of directional pad movements and combinations of button presses. If you have played Soul Calibur before you will know this is exactly the same fighting system as old, which is a good thing of course because the Soul Calibur series has some of the most finely tuned fighting action that you are likely to see on any consoles or pc game. Some may argue Virtua Fighter 4 is the king in this department. Tactics in Soul Calibur have always rewarded the attacking player, defensive play is not rewarded. This is even more the case now, as the attacking player can pin the defensive player against the wall and unleash a very hard hitting combo. This is usually only possible when player fail to get their character back off the ground quick enough to defend themselves. If you defend yourself successfully you will reap the rewards as you will have a small opening after the attacking players combo when you will be able to retaliate. Of course there are far more tactics to Soul Calibur, each character has a guard breaking move which will deal out damage even when a player is on guard. If you are an avid fan of Soul Calibur you will generally find that your tactics in version II will still work in III. Soul Calibur III has multiple fighting stances for each character; this enables you to make other special moves without having to learn ridiculously long combo strings as each stance has a different set of moves similar to Mortal Kombat Deception.
Soul Calibur III differs slightly to the previous Soul Calibur games in one respect, this is exclusively a PS2 game, it hasn't even been in the arcades which means there is no arcade mode unfortunately. There is a quick play mode which does the job but this is way down in the menu system in amongst far too many game modes. The main single player mode is called Tales of Souls which is surprise, surprise, a story mode. This is basically you standard affair with one slight change, you have the ability to choose you next destination, but to be honest this makes little difference. The worst parts are the cut scenes which cannot be skipped. However you will have to play Tales of the Souls to be able to unlock the other players. Then there is another "big" mode called Chronicles of the Sword. The problem is this mode is also flawed as you will probably do as much waiting as you will do playing. The story line is text based, which always makes a game look like the developers just couldn't be arsed to add speech, just lazy. The best mode in this game by long way is the basic two player game. If you don't have any friends to play with you it would be wise to set the difficulty setting to your skill level and fighting the computer. The problem is the AI rather than improving its fighting skills will actually just improve its reaction to inhuman abilities.

Soul Calibur III looks very good. As every good fighting game should Soul Calibur runs at 30 fps to produce silky smooth animations. All of the weapons shine realistically and the trails of colour are still there when weapons are being wielded around the screen. Arena's look very good and when the action gets intense parts of the arena will break and fly off the screen, making the action look even better.

Audio is good the sound effects of the swords clashing and slashing are great, yet familiar. The music is your typical Japanese beat em up affair with lots of synth's make up the score. Then there is the narrator who introduces fights and concludes them.

If you're looking for a new Soul Calibur you are not really in luck. Soul Calibur III just updates the visuals and some of the finer points of the game play. The new modes are not the best, but you will spend plenty of time unlocking the extra characters. After this you will undoubtedly go back to the versus matches you know and love. So on that note it is difficult to see what would attract anyone to buy if you already own Soul Calibur II. If you don't own any Soul Calibur game you should you should own this one, essentially the same as the II with the same technical and fast fighting action and prettier graphics. It's still an amazing game in its own right.