The Sims is one of the biggest game franchises in the world which lets you take control of miniature computer people and manage their day to day lives and surroundings. There have been numerous iterations of the game which have developed this `life strategy' game and Sims 2 Pets throws, guess what.. pets into the mix. You can now design, dress and train your own cat, dog or fish to look after, teach new trick and interact with other pets and the town surroundings. 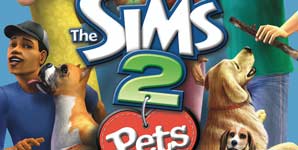 On top of this you also have your Sims life to organise and manage in terms of sending them to work, looking after the house making friends etc.

Story
There is no real story to speak of as the game is pretty open ended and you can spend as much or as little time trying to fulfil the various objectives. It is the sort of game where you get more out of it the more you put in.

Graphics
Graphics are bright and colourful in keeping with the humour and fun inherent in the Sims series and if you are a fan or have played any of the other versions of the game it will be instantly recognisable. If you are new to the series do not expect to be blown away by jaw dropping graphics - visuals are functional and inoffensive but nothing to write home about.

Sound
Sounds in the game are functional - dogs bark, cats meow and the Sims chatter in their chirpy `simlish' language. Again nothing offensive but all instantly forgettable - you wont be humming any of the tunes on the way home.

Gameplay/Controls
Essentially you take control of a miniature person in an imaginary town and guide them through their everyday life and surroundings you can decide on their career, house, and friends. Also with this instalment of the game you can now give them a pet, train it and teach it the odd trick or two and dress it up Paris Hilton style.

If the above paragraph appeals to you then you will probably love the Sims 2 and enjoy playing this game for hours, however you probably already know this and have played multiple versions of the game before and as such this is nothing new to you.

If, like me, this is does not sound like fun you will probably not enjoy the game. Its not that it is a bad game by any stretch of the imagination however it just does not excite me in any way. For me games are about escapism and doing crazy things not possible in real life. In this game you can go to work, do the shopping, go to the toilet, talk to friends and so on. The thing is - I CAN DO ALL OF THIS IN MY ACTUAL LIFE!!!!!! Why would I want to then have to do this again on a miniature scale in an incomprehensible language and fictional world? Also I am not a pet lover so the animal interaction is lost on me, but the point is if you like pets then you probably have one anyway and can do all of this stuff anyway instead of with a computer pet with limited AI.

As such the game sort of passed me by as I had no interest in developing any of the characters lives further.

There is a lot of depth and the game is well thought out and easily controlled with a point and click menu arrangement where you stack orders/actions for the various characters to undertake.

Conclusion
For me this was a difficult game to review, not because it was horrible, just that I found it hard to muster any interest in delving deeper into the game. This game is like Marmite, you will either love it or hate it. Any for those that love it you have probably already tried it. If so and you want more of the same then this is the game for you however for me I'll live my life in the real world and use my PS2 for pulling off 10 hit combos and slaying demons with a samurai sword.