There is something universally appealing about Ninja games that will allow you to overlook flaws in the title to just enjoy maiming someone whilst they are unaware of your presence. Shinobido falls squarely into this description. Will you enjoy it? - Yes. Will the same game have you banging your head against a wall in disbelief at some of the flaws in the game and the fact that some of these lessons should have been learnt by developers nearly 10 years ago? - Yes. Shinobido provides a generic gaming paradox, equally as fun and as annoying in one neat package. 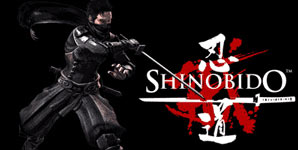 The main evolution from previous Ninja titles, Tenchu for example, is that Shinobido does not follow a linear mission pattern. This can be applied to both the way missions can be selected through choice rather than thrown at you one after another; and the way in which you are free to roam around the rooftops in your mission area freely and not be funneled into specific areas by the mechanics of the game. The storyline, such as it is, sees you take control of Crow, a ninja whose memory has been stolen in battle by a weird Japanese gypsy. Crow must find the scattered remnants of his memory that are conveniently stored in `soul gems'. You will do this by completing missions for three Japanese warlords who are fighting each other for control of a Japanese province. Grater success will lead to the more successful retrieval of your memory.

You will choose your missions from your home in the middle of the forest and once chosen you will have to stealthily make your way around your mission area to achieve your given aim. Whilst stealth is still the key other favourite techniques are still employed such as guard misdirection. Shinobido also employs a compass indicating the nearest guard to you and a pair of eyes indicating said guards alertness to your presence. Here comes my first gripe. Why incorporate all this sophisticated means of stealth assistance, when you make the guards as dumb as a retarded mule? Even if you could not just walk up to a guard from behind at varying angles, just by watching them from a rooftop means that you can ascertain their pattern (this is cumbersome however.) This in turn leads me on to my major gripe - the camera. Wouldn't life be so much simpler if up meant up and left meant left? No, no, no, let's reverse everything! This would really get my goat if I had one. Should be detected, I would suggest legging it as there is no effective combat mode to speak of and you will be playing pot luck as to how many guards turn up.

In between missions you can return to your home in the forest, and depending on how successful your missions have been, buy and distribute upgrades. Be it weapon or health potion, you have the ability to equip the items for your next mission or send them over to a disgruntled warlord to put you back in the good books following a botched mission. Speaking of which, some missions that you encounter are really contradictory to stealth in general. Lugging around a massive box on your back that you have to deliver whilst bent double and not being able to hold anything else or maneuver, can really compromise your ability to remain undetected. As a result you have to ask the question why such missions would be included in a stealth game.

Moving on to graphics, in a nutshell they are rubbish. They're square, rigid, clunky and look like they are from an early PS One title. The sound is average to poor and won't really help you in the slightest.

I have slated many aspects of this game, and referring back to my opening paragraph; I still can't help but like it. This sounds stupid and a contradiction but the main area of the game - the stealth kills - are so utterly satisfying that it will have you ignoring the flaws just to get the next one and make it more spectacular. This game should get a middling score, but still the drug of the next kill can't bring me to do it.