This was my first introduction the EA Rugby series and being only an armchair rugby fan, it surprised me how the game hooked me. Puns aside, my initial thought was that you do not have to Rugby fanatic of tactical guru to enjoy this game. Depending on your level of expertise, there is a tutorial for beginners that simply explains the controls and, if you are a real novice, the rules. 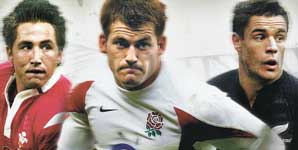 Getting in to the game itself, the flow of the action is extremely realistic especially in the relation to passing as you try and break through the oppositions defence. If you run in to the defence there is an option to offload as you are forced face first in to the mud, which can keep the flow and speed of the action going whilst keeping stoppages to a minimum. The joy-pad controls help in keeping the game flow and you do get the feeling that this could seriously been affected had the controls been set up in a different manner.

When the action stops there are various actions available in terms of getting extra men into a maul in attempt to push the play forward, as well as opportunities to affect a turnover in play. You can initiate set plays in an attempt to break down the defence and quick penalties and quick line-outs are also opportunities for you to keep the pace of the game moving. Set piece scrums and line-outs can often be pretty frustrating especially if you the defending team as often there seems no good reason for one scrum overpowers the other, whilst other times you cannot understand why your perfect timing at a line out resulted in you losing possession. Your team will also feature star "impact players" who will be the ones most likely to be able to blow a game wide open or win it single handed. Having got your all important try, conversions are then pretty straight forward unless it is gale force conditions and your kicker is stuck out on the wing. The more kicks you successfully plant over, the more a part of you wishes that they were more of a challenge.

I found the defensive aspect of the action quite frustrating as your technique for tackling just involves running into the opposition. In theory this is simple enough but the sidelong camera angle often results in a misjudgement with the result being that your opposition are clean through with more a chance of scoring than a man in a brothel with a Â£50 note hanging out of his fly. This camera angle also means that it is relatively impossible to grind out any sort of consistency in drop kick attempts. The are further options in your defensive armoury that include a diving last gasp tackle and the option of clothes lining your opponent as he goes past you. This is highly satisfying but as you can imagine, there is a highly likelihood of being penalised.

There is depth to the rugby union world here as well, with real players and teams featured from international as well club rugby. Alongside this are all your favourite competitions from the World Cup and Six Nations, as well as the Premiership amongst many more. You will not be stuck for tournaments to enter.

The game looks well and has nice features such as your players getting muddier as the game goes on. The commentary sounds good initially, but falls down where every sports simulation commentary has in the past â its repetitive nature. Minor quibbles aside, Rugby 06 is an enjoyable outing with my only concern being that it may not quite hit the spot for massive rugby enthusiasts in terms of its on-field depth and tactical options.