Project Zero completes a trilogy with the "The Tormented". Players take control of Rei Kurosawa, a young female photographer with a wheelbarrow full of issues. As you take your first steps into the PZ3:TT, the cut scenes explain how Rei has been commissioned to photograph a purportedly haunted mansion. As she gets comfortable ambling around the empty rooms snapping away, she catches a glimpse of her former lover – and dead fiancé – Yuu. Affected by this experience, Rei drifts into a fugue dreamlike state in which she roams the mansion and is attacked by a malevolent apparition. Rei then awakes in reality and instead of thinking "what the hell was that!?" ponders why lost souls inhabited her dreamland. She then discovers that a mysterious and perplexing tattoo spreading all over her back. 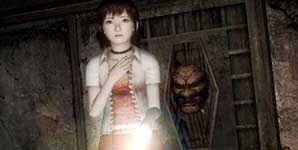 As you progress through the game, you switch between these fugues and reality whilst random ghosts with personality disorders take their rage out on you by trying to sap your will to live. Your only weapon? A camera…. When I first played the game I was tempted to stop here, come off it, a damn camera?! Ok, its not just any camera, it's a "Camera Obscura" but its no ghost-busting Proton Gun is it? I'm glad I didn't stop though as this is a game that will keep you hooked.

On the face of it, PZ3:TT has a Resident Evil feel of fending off lots of scary bad guys and unlocking door after door after door. There is so much more to this however. The Camera Obscura fends off apparitions when you switch to first person view, line up the shot and wait for your "shutter chance" where the reticule (the circle outlined in the middle of the shot… don't ask) turns red, in a kind of exorcist manner. You can take pot shots from further away and outside the shutter chance but it won't have the ghost scuttling away and earning you experience points in the process. These points can be used to upgrade your magic camera to increase range, shutter speed and damage you can deal out to these transparent ASBO's. As your camera develops you have more chance to rack up combos and inflict more damage.

Basics aside your mission is to stay alive and uncover the mystery of these lost souls and the dead fiancé. The atmosphere the game creates is as effective as I have come across in terms of its effect on the player. The dreamlike state has you in the dark using a torch to find your way around and the way that the graphics are used in this aspect, coupled with the sound (a new age ambient and above all chilling soundtrack) and the expectation of an apparition around the next corner keeps the player jumpy and on the edge of your seat. This tension is sustained throughout the game with an atmosphere thick in suspense.

Other positives include the puzzles that you have to solve in order to progress, the game is laden with brainteasers to keep you occupied and bonuses to reward your exploration. Variety is included as you get to control Rei's buddies at certain points, this involves taking control of Minu Hinasaki (the leading lady from the first Project Zero) who is Rei's assistant and Kei Amakura, a friend of the dead fiancé. Finally the storyline is excellent with each harrowed soul having there own story to tell.

Drawbacks include the slow turning circle you have in confined spaces and are so frustrating when you got a couple of ghost humping your back and you've got to find a camera angle; the cut-scenes seeming a bit too drawn out – this was unnecessary as the game has an excellent longevity to it anyway; sometimes you have no indication if the route you are taking is correct and whilst I wouldn't want funneling to easy answers, a handy hint that you are going about it in the right fashion wouldn't go amiss. These are relatively minor grumbles however, as this is game that will keep you up at night. But never mind, who needs sleep anyway?