Onimusha: Dawn of Dreams is the fourth and probably final incarnation of the hugely successful Onimusha series on the PS2. Initially the series was meant to comprise of only three games however DoD departs from the trilogies' story and introduces a host of new characters and a new story thread in the Onimusha universe. 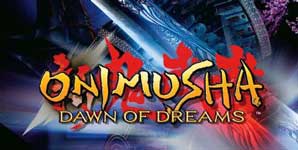 Story
Dawn of Dreams offers you a substantial new quest with five very different playable characters. Previous instalments of the series had you facing off against the demonic Nobunaga and his evil genma forces. In DoD however there's a new bad guy in town, the villainous Hideyoshi but you also assume the role of a totally new lead character. DoD focuses on Soki, a bleach blond, kick-ass samurai attempting to save feudal Japan from yet another demon invasion. The story takes a bit of time to get into and at times does tend to drag however the cut-scenes through which the story is relayed are a fantastic site to behold and the voice acting is definitely above average. Though there are a few twists and turns in the story I never felt truly engaged with the characters as story wise there is nothing that hasn't already been covered in previous Onimusha games.

Graphics
Graphics in the game are superb, cutscenes are spectacular, in game action is crisp, colourful and animation is smooth. DoD graphics are very similar to those found in last year's samurai adventure Genji, however DoD is more colourful and the characters and enemies are much more flamboyant. This is definitely a high point of the game and straight from the first cut scene you will be wowed.

Sound
The voice acting in the game is good however lip-synching in the cutscenes is noticeably off because of the translation from Japanese. In game you will hear hacking, slashing and multiple screams of pain from the seemingly endless hordes of zombies that you have slayed. The music in the game fits the period and raises the tension levels at the right times.

Gameplay/Controls
Gameplay consists of making your way through a total of 17 increasingly difficult levels. Completing each level requires you to hack your way through hordes of demons, solve a variety of puzzles and face off with some very impressive bosses. Combat is the main focus of the game and is easy to pick up but also has depth. Early on enemies can be dispatched quickly simply by blocking at the right time and hacking away however later on more abilities are learned and you are able to use a combination of magic, evasive moves, special attacks and split second timed devastating attacks.

DoD allows you to play with 2 characters at once which you can switch between at will and also sub in other characters. All of the characters have differing fighting styles and abilities that allow them to access different parts of each level – this ensures that you will replay each level with all of the characters if you are a completionist to obtain every weapon and treasure available. Also your companion aids you in battle and is directed by your commands. The AI is generally pretty good although sometimes frustrating in tense moments.
The game also introduces a huge RPG element as there is a vast array of weaponry, armour and skills to develop for each character.

The game is one of the longest games in its genre, no only because of the replay value but also because of the huge (and irritatingly difficult) post game 'dark realm' challenges on offer. For the sadists amongst us there is also a number of difficulty levels on offer that will test the skill of even the most battle hardened gamer.
While the game is long, certain parts do seem repetitive as often areas have to be replayed by different characters, also some of the boss fights are overly long, not because they are particularly challenging but because of the seemingly infinite health bars of the said boss.

Conclusion
Overall DoD is a fantastic game, awesome graphics enjoyable gameplay and a lengthy challenge – well worth a purchase. Overall I give Onimusha: Dawn of Dreams