Okami begins with a (very) lengthy story about how the multi-headed demon Orochi has been brought back to life and turned the land into a waste-ground as he once did in times of old. Accompanying the subtitled story telling is a voiceover that can only be described by likening it to how the adults sound on the telephone in any Charlie Brown or Snoopy cartoon. Initially amusing, but as the story drags on until what seems like twenty minutes have past, increasingly irritating. As the game begins you take the role of the white wolf Amaterasu. Surprisingly this is not an Italian footballer but rather the embodiment of the sun god who banished Orochi the last time he raised his ugly heads using the unimaginable power at his possession that is derived from the sun itself. Your task, alongside your sidekick Issun is to roam the lands 'Nippon', defeating any variety of demons that stand in your way to find the 13 guardians of the brush strokes before defeating Orochi and reclaiming Nippon into peace. 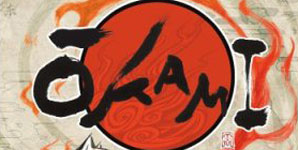 Okami is very quintessentially Japanese and this could put some gamers off, put what is not in doubt is how visually stunning Okami is. Whether it is the unique cell shaded Japenese-stylee graphics or the multi-coloured blossoms that float down as if over the screen itself, Okami's graphics are a unique work of art in themselves. I read somewhere that the game looked "pretty" and I found that I could not disagree nor attach that description to any other title that I have come across. In terms of the game play for this RPG, you find that the special powers that you possess fully integrate with graphics. By pressing down R1 you can rewrite the landscape as you see fit by using your ability to delve into another dimension and change the landscape as you see fit via the 'Celestial' brush stroke power that you enjoy. Whether it be painting a bridge over troubled water or cutting you way through obstacles, this power increases as you find more and more Celestial brush guardians which gives you more and more scope to unlock new areas and territories. These will either be to progress the game or to unlock side missions or treats. You may even be able to control the weather or stop time at some point.

If the power of the celestial brush was not enough, Amaterasu has fifteen other weapons at his disposal that are not only split into different categories (reflecting mirror, rosary beads, and ceremonial sword) but that can also be used to different ends by combining them with other weapons and artefacts in different orders creating a massive armoury at your disposal. All of this means that this is an RPG with a whole array of depth. It is one of those titles that seem endless if you are a perfectionist and want to unlock every single area and one that is still a lengthy adventure if you want to see out the storyline in the quickest time possible, and rarely will you be bored. You are more likely to be annoyed at where the last few hours of your life went when you randomly find yourself looking at your watch. The soundtrack of quaint and comforting Japanese ambiences lull you into a false sense of security and adds to the experience, before you are attacked and the sounds become more pressing and urgent as danger is close.

On the downside, Okami could be deemed to be quite easy in the sense that demons easy to destroy once you have found their weakness and by the time you reach a boss, you are likely to be powered up as far as you can be thus giving you time to find a weakness and exploit it before you are likely to capitulate. Secondly, your flea-like companion Issun is a chirpy pain in the the ass and one that deserves a good slap if he doesn't shut up. But overall, Okami does not have many flaws.

If you are fan of RPG's there is most certainly enough here to keep you entertained for many an hour. The title is as absorbing in its game-play as it is in its immaculate graphics and the originality of the title means that it is definitely worth a look.