NHL games have been big on the PS2 scene from the beginning, increasing in popularity every year. 2K Sports have got it right with their NHL series, the last two games boasting a full ESPN license. Their latest instalment, NHL 2K6, has failed to retain the license, and ESPN has opted for EA this time around. However, the most important element of an NHL game is the game-play, and on that front, this is best in its class. 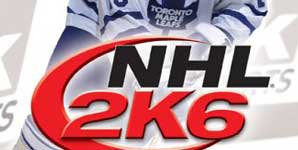 The soundtrack in a game is vital and this happens to be one of the finest. Modern rock songs accompanying a hardcore hockey simulator are perfect and really compliment the game. Well that's the mood set, let's play hockey…

And this is exactly what 2K6 does, and with some style. The game-play is brilliant! Fast paced matches meet the high tempo realism of the game and stroking the puck around the rink is effortless. The controls are well designed and can be picked up in an instant. Powerful shots and first timers can be fired in from all angles in search of the next goal. Everything you see being done by the professionals on TV can be achieved in this game and it is incredibly realistic.

There have been many new features added to 2K6, one of the best being pro control. Push R3 and an icon appears above each player indicating what button to press. You can easily cycle the puck around to team mates with a touch of the corresponding button. Double tab the button of your team mate and a first timer will be fired or simply move your right analogue stick in the required direction of the pass. Pro control opens up a new level in terms of offensive play and goals look very slick in this new method because of the speed you can execute them.

Basic features in 2K6 are delivered well such as the realistic commentary throughout the games. A couple of typically American commentators spice up the general feel of the game and it is enjoyable to have them talking during play. I sometimes find with sports games that the commentators spoil it but I didn't need to mute 2K6 when I was playing which is a bonus. Also simple things in game-play made it much more enjoyable like the force at which you can check an opponent and the crowd reaction to a goal.

Another new feature in 2K6 is on the fly coaching, allowing you to change your style of play with a touch of a button. This gives you the ability to shuffle your team around into a more attacking or defensive style with little effort. There are so many improvements made to the game-play in areas you thought were already at their best. This is what makes 2K6 such an excellent ice hockey game.

I was never bored playing 2K6 with such a wide variety of game modes to choose from. Whether it is playing a quick game, challenging friends at a mini game or fine-tuning your hockey skills, it has it all and much more. Out of all the game modes I was particularly impressed with party mode. In this mode you can challenge up to 3 of your friends in highly entertaining mini games. Such games as 'hardest hitter' and 'find the puck' ensure fast paced, head to head action.

Gamers looking to make the most of 2K6 have been granted a detailed season mode to sink their teeth into. With a realistic layout to the season and plenty of trophies and rewards up for grabs it will keep you occupied for hours.

In the graphics department 2K6 is ageing. The menus look ugly and are sometimes difficult to navigate round and find the option you were looking for. In-game graphics are a fair bit better with movement on the ice looking smooth and faces of the players detailed and accurate. However some of the small cuts of the bench swapping around or the players moving in for a face off look very poor and don't keep up the standards of the rest of the game. The frame rate is inconsistent and therefore the game doesn't flow as nicely as it perhaps should.

Overall this game has every ingredient needed to make a fantastic ice hockey game. Superb game-play, fresh new features, good choice of game modes and great longevity being the main ones. On the other hand 2K Sports has lost the ESPN license to EA and the graphics do little to inspire. NHL 06 is out at the moment which is worth a look but I definitely recommend NHL 2K6.If you are judging this game by game-play alone 9.5/10 but due to some features that cant be ignored I award 2K6…