The last Need for Speed - Most Wanted - proved to be a huge step forward in an already popular title. The 2006 edition, Need For Speed: Carbon - so called as racers race for City territory in the nearby Carbon Canyon - is not such a major leap forward so much as a jump this time. In come new features and out go some old in an attempt to keep the update as fresh as possible. 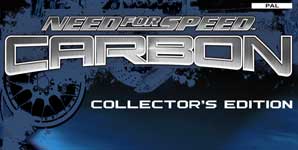 Carbon plays very much like previous Need for Speed titles in terms of the actual racing but differs in the way the career mode has been constructed. Your goal is for your `crew' to take control as the undisputed Kings of the City by competing in to take control of four different City suburbs through inner City and canyon races out of the City limits. The gamer can pick from three different types of car classes - exotic, tuner & muscle, one more than previously with muscles being the addition. The addition of you having a `crew' is also new to Carbon, as is a unique car auto sculpt customisation and new `drifting' races.

Anyway, back to the meat of the game - the career mode. You start off as a nobody in the Need for Speed universe, having had it all but lost it, and as a result you have renewed megalomaniacal visions of taking over the street circuit yet again. You first off choose your car class. Muscle cars are extremely powerful with great acceleration and top speeds, but handle like the steering column is connected with an elastic band. Exotic entries look good but are quite random, whilst tuners are the middle-of-the-road best of both worlds. As you win races and progress through the game you unlock new machines with a variety of Porsche's, Dodge's, Mercedes', Mazda's and the odd Mustang to play around with.

To progress through the game you need to win new territories for your crew, with each territory being split into a number of sections with three or four races to complete in each. As each territory is controlled by the leader of another crew, you will challenge and be challenged by said head honchos whom you will have to beat to win a shot at a two leg race in Carbon canyon for the rights to the area. The first race involves you following the boss as closely as possible, with your score based on proximity. The second reverses the scenario and the overall score determines the winner. In between missions you can customise your car to your desire at your safe house. You can buy and sell parts and looks the more money you earn and the more you progress through the title and you can even hire a scout you can auto sculpt your modified parts to the extreme be it spoilers, bumpers, bonnets or roofs. The effect is purely visual so it will be for some and not for others.

In between races you are free to roam the City, but watch out there are pesky policeman everywhere who will try and run you off the road for as much as ignoring the speed limit. This feature is also incorporated during races, with the fuzz either scuppering or assisting your attempt for glory. A nice touch that keeps the game interesting.

The game looks very well with a lot of attention paid to the graphics. No more is this in evidence than on the circuit with a lot of dark courses and night races included to emphasise the lights of the City and road signs as they whisk by creating the impression of velocity. In the meantime the soundtrack is upbeat and energetic to maintain the effect and contribute to the racing experience whilst the engine sounds seem relatively realistic too

Carbon is sometimes too focussed on its graphics, cut-scenes and creating a "petrolhead" feel in this manner with daft costumes and characters, though I certainly won't complain about the women, pixelated as they are and you do sometimes wonder how much better the game-play would be without this heavy focus but all in the all the game looks very well and doesn't play half bad either.