Mortal Kombat is back and this time it has brought with it a league of combatants that include every fighter ever to appear in a Mortal Kombat game. The cut-scene on loading the game informs you that there are now so many fighters that the Universe is on the verge of being torn apart and so the powers that be have organised one last all-encompassing mega tournament to sort the wheat from the chaff and safe the Universe from annihilation. It is natural selection at its finest - with weapons, special powers and a whole raft of blood. 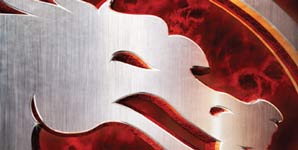 Whilst it is nice to return to Mortal Kombat at any time from the viewpoint of nostalgia, the arcade fighting mode is pretty much same old, same old. Okay the fighting sequences are now 3-D but aside from this I can't really fathom what has changed since the early Mortal Kombat games. The graphics are still clunky and poor and the sound is not much better. The gameplay is still pretty much identical and not particularly difficult either, all of which leaves to an easy win and your opportunity to finish of your opponent. Now, when this franchise was original the manner in which differing fighters could cause all manner of sickening fatalities was exciting, new and satisfied the blood lust of most. Now it just seems dated. Ok it is nice to see what new fatalities have been written in this time, but your other flagship fighting titles such as Tekken or Soul Calibur are so good that they don't need such gimmicks. In its main arena of the fight, Mortal Kombat is still enjoyable but at the same time quite annoying. How good could it have become if it had evolved?

Arcade mode aside, Armageddon features a number of extras to keep you entertained. You can now create your own fighters and furnish them with their very own newly created finishing move to create the ultimate fatality.

Further to this you have "Konquest" mode which is a scrolling beat-`em-up mode where your character - Taven - comes up against vast hordes of retarded henchman who seem to want to hurt Taven but just aren't quite bright enough to realise how to go about it. Bosses are more difficult to overcome but then again so would a dead mouse. Along the way you are given the opportunity to collect items that will unlock you some goodies - such as new garments, weapons and jingles. However, the repetitive nature of fighting the lobotomised army combines with a crappy camera angle may have you wondering whether your time is being used wisely in attempting to unlock these items.

You will also have the option of going into "Motor" Kombat. Go on guess what this is? That's it, Mario Kart with Mortal Kombat characters. Though I mock the title, I am a bit random so in premise this sounded like a great idea to me. However, it turns out to be a poor version of the something that's already been done. Your characters are cartoon-like in appearance and you are restricted to one weapon per race with is unnecessarily restrictive. The track specific fatalities redeem the extra a little though.

Since Mortal Kombat first hit our screens, many things have changed. Violence in gaming is a lot more accepted and has been done in many different ways. All in all gaming and society have moved on and Mortal Kombat has not. Its still fun and it's a great walk down memory lane but the fact that it hasn't really evolved and the poor attempts at providing extra's to give you some arcade relief mean that Mortal Kombat cannot really be consider one of the flagship games of its genre any more.