The latest comic inspired game from EA has you fighting your way against an evil alien invasion using a multitude of Marvel characters. A combination of story and versus mode (also supporting online netplay) provides a bit more depth to what is a fairly ordinary fighting game. 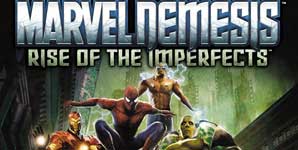 Story mode allows you to fight your way through a fairly diverse array of arenas using a selection of 10 superheroes, including Daredevil, Wolverine, The Thing, to name just a few. Each scene is set in a large destructible arena that allows you to use your surroundings to defeat an opponent as well as let off some steam by causing some carnage. Throwing cars, oil drums and lampposts at an opponent as they struggle to get back on their feet is highly satisfying and a good way of conserving your energy.

As you move through the stages you change the hero you fight with and gradually unlock all 18 characters to use in versus mode, including the new Imperfects. Each character has been developed to account for their specific strengths/powers so as you vary the hero you're controlling you'll need to alter your style of fighting to use them to best effect. As expected, there are the usual on-screen tutorials as a guide how to harness their superpowers.

Unfortunately the story isn't very clear exactly who/what is invading and why 'bad' heroes like Venom are suddenly fighting along side their counterparts. This is a let down considering it's a comic book development and a good story is what a fan would expect. So I suppose this is a game that is geared more towards a beat em up fan as it's all about the mini-battles. But, this is also a let down as there isn't enough diversity between the numerous stages. Although variety comes in the form of battling with a different character it still becomes a little tedious when you're on a treadmill fighting in the same situation over and over. Although, it does alter from one-on-one fighting to 'numerous assailants' depending on the level, but this is still a little restricted compared to what could have been developed.

There are small rewards for each victorious battle with unlockable cards and comics to build up a collection. Definitely a good idea to include a comic as a reward for progress and will be appreciated my Marvel fans, although my personal opinion is they could have chosen a more exciting stories.

The controls are kept simple with the usual selection of attack, jump and throw. There aren't really any combos to get to grips with either as more devastating manoeuvres arise when attacks are coupled with L1 or R1 to unleash mobility moves and super attacks. A Super energy meter controls the amount of maximum power moves you can perform, but it's easily replenished by blocking or performing a string of attacks. Once the meter is full you can enter Rage mode, which gives you unlimited super energy for a short period of time. This creates a good opportunity to really get stuck into a group of aliens or simply go to town on an enemy. There are times when it feels like you aren't totally in control of the character and certainly when flying or web zipping it can get a bit frustrating to make contact with your adversary due to camera angles. But on the whole it tries to keep the action thick and fast in your face.
The sound and graphics are reasonable but EA don't appear to have attempted to break any new ground with them. Especially with the cut scenes in story mode which have more holes than a colander. Finishing moves are always a tidy touch and can only be executed against a weakened foe but once again they could have been made a bit more glamorous. They don't live up to the bar set by games such as God of War for example.

On the whole it offers a decent selection of superheroes to use and abuse so will offer an attractive new version to comic and beat em up fans. Destructible arenas and superpowers mean there is enough eye candy to keep you interested in the short term but the repetitive story will probably deter gamers who need a bit more thesedays. I doubt it will live long in a versus mode either as it doesn't have as much depth as other fighting games, so unless you're a real Marvel fan it won't blow you away. I'm surprised it's a 16+ certificate, it seems an ideally suited game for a slightly younger gamer. But we don't want to turn the future generation into homicidal nutters who think they can fly and throw cars. There are enough ASBOs as it is.