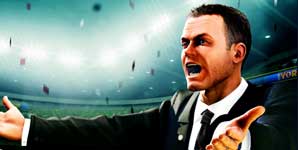 The latest update of LMA Manager hits the market with the publishers claiming that it is an "evolutionary year for the series" and that it has "the most powerful database engine yet." The first aspect of LMA 2006 to grab you is the introduction of an option to create your own manager likeness as you take your initial steps into the game. This would suggests many parallels to the 'EA Game Face' should you be taking direct control of your manager, however this is not the case and it seems like a pointless addition to the game.

Progressing into the game menu, there are no major additions to LMA 2005, with the possible exceptions of now being in charge of developing your training facilities as well as taking your own training matches. This is a nice addition if you want to put the time in trying out different tactics in a scenario that won't harm your league position, but the reality is that this will be time consuming and a distraction from the game itself. Scrolling around the main game features – Squad Screens, Training, Emails, Competition Information, Transfers, Finances, Ground Information, manager Rating and the Calendar – works in much the same way as LMA 2005. It is a little cumbersome at first but this is generally down to the nature of the PS2 Controller not being a mouse.

Delve further into the day-to-day activities and the updates to the game become apparent – updated player listing, transfers and statistics as well as the introduction of more leagues and players from around the world. The transfer element of the LMA has also undergone an overhaul with Managers now being able to offer part-exchanges, instalments and a variety of other transfer related option that make transferring players more realistic. There are now more instructions that you can pass on to your scouts before sending them out to watch players which means that you can be as specific or as broad as you like when scouting. However, the statistics relating to player attributes are consistently inconsistent with reality and many are now less likely to join you as restrictions based on your league, league position and financial state may put them off joining you altogether.

A consistent positive for the LMA series has always been the ability to watch your game being played in a simulation that does its best to mirror the watching of a game on television. This has generally been the only aspect of the game that could be deemed superior to the likes of Football Manager's "subbuteo-esqe" in-game screen. This match day simulation returns in much the same guise allowing you to tinker with tactics during the game and see for yourself what differences they make. However, the same drawbacks are still here with the game taking an age to load and the match itself being devoid of any kind of atmosphere that may draw you further in to the experience.

Following the game itself, "Football One" is back offering your statistics service of all the games played, league tables, highlights of your own game with commentary from Barry Davies and summary on your game voiced by Gary Lineker and Alan Hansen. This aspect again has not altered much from the previous incarnation of LMA and will still leave you begging the question of why Barry Davies is commentating on highlights of a game you have already watched instead of the game itself.

Yes, this is the best Football Management simulation available to consoles. Yes, it is an enjoyable game in its own right. And yes, it is a nice and alternative to the overwhelming depth of Football Manager on the PC. But… If I return to my opening gambit, it is certainly not an evolution on LMA 2005 and whilst the depth of information on the database has increased it will never be able to do so to compete like-for-like with management simulations on the PC. In a nutshell I would recommend this title if you want a Football Management Simulation for the PS2, should you be looking for something better than that which resides on the PC or just want to upgrade I would advise you to keep looking.