If you are buying this game or reading this page I assume that you are familiar with the concept of `Lemmings' titles. However, for those of you who have randomly stumbled across this page, the objective of the game is to guide your group of kamikaze Lemmings to the exit of the level. Sounds simple doesn't it? Well not when you have an assortment of traps, holes in the ground, lava and whole nasty assortment of other obstacles to negotiate. In order to do this you have an assignment of jobs that you can allocate to any particular Lemming; from carpenter/bridge builder through `bouncers' to diggers, crawlers, suicide lemmings and much more. Per level, you are assigned a time limit and percentage of Lemmings that must survive in order to progress to the next level. 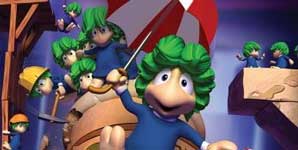 Lemmings has been around a long time and on various formats, but has now been released on the PS2. Rather than any kind of re-inventing of the wheel and evolution this is pretty much the same game it has always been regardless of its introduction to a new format. It is pretty much entirely the same game that has been available on the PSP. Sure, there a few new levels to have a crack at but if you are expecting something that will take Lemmings to the next level or any kind of development whatsoever, then you will be sorely disappointed. If you are looking for a bit of nostalgia and a trip down memory lane then look no further.

The controls work relatively well and this is definitely an area that you look at when you have got used to controls on different hardware. The only slightly annoying transition is using the shoulder buttons to cycle through the job list rather than there being any facility to move the game cursor over the icons. However, this is something that you will get used to pretty quickly.

So what is new? Well, you no longer have to scribble down codes in order to return to the levels that you have previously completed. These, thankfully, are now auto-saved. As I Have already touched upon, there are a handful of new levels as well as the ability to create your own Lemmings levels. These can also be stored and accessed online, which means that there are potentially a vast number of new levels at your disposal. Lastly, the designers have incorporated an EyeToy mode, where players can create bridges with their own body or individually move a Lemming to safety which is a great concept. However, over/under sensitivity of the EyeToy will prove it to be a frustrating exercise with Lemmings changing direction on the basis of a shadow or change in light level (God forbid any turn another light on whilst you are playing or you will rip their head off!)

Whilst the developers have tried to add something to the PS2 Lemmings release rather than just transfer it, it really does end of being a walk down memory lane rather than anything new or groundbreaking.