With the current wealth of games hogging the racing market such as Burnout, Need for Speed and Gran Turismo there is much need for a game to rise above them all and set a new standard. LA Rush combines popular features from several racing games to try and form an 'ultimate' racing sim. Also thrown in is the edition of the West Coast Customs Crew from the unrivalled MTV hit show 'Pimp My Ride'. 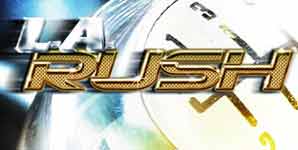 First off, the graphics in LA Rush are brilliant. During the cut scenes there is a lot of detail put into every part of the clip. The people look crisp and the West Coast Customs team can easily be distinguished from the TV show. I was also amazed at the quality of the cars. They gleam and shine in a realistic way and I could not pick a fault when comparing them to real, on the road, cars.

The LA Rush storyline follows a successful street racer named Trikz who after insulting another high powered guy on the racing scene is stripped of all his possessions and left with one car he began his career with. Although it was quite baffling how this occurred I was relieved to see what was available on the streets.

With the help of a friend named Ty you are given a series of races, either cash races or races that will progress you in the story. The story races are against skilled drivers and a large amount of money are needed to compete. If you lose you are stripped of the money and you have to pay to do it again. Everything in the game represents LA itself which is great and there is a pretty large area to drive about in.

The driving resembles Need for Speed in the sense that you can explore anywhere within the city and choose when and where you challenge the street racers. What's different however is that police cars chase you if you cause damage to pedestrian cars and the aggressiveness of the cops is determined by the amount of stars at the top of the screen, a bit like GTA.

A hit of the select button launches the map where an array of race meets can be seen. You can choose a point on the map where you will be directed to after you return from racing. A good feature of LA Rush is how you unlock new cars that have been stolen from you. After you have completed a story mission a new race appears; the Acquire race. In this new type of race the aim is to take one of the cars stolen from you and drive it back to your home. You are chased by a bunch of gang members that try and shunt you and destroy your car. If your damage surpasses a certain point the race is failed but if you make it to your house you pay the costs to fix the car, depending on how much damage has been done.

While racing in LA Rush I didn't feel the same rush as Burnout or Need for Speed. It isn't as fast, even while boosting, and races can be too short with little competitive action. When you crash the car slow motion is triggered and parts of the car are blown everywhere. Although the crashes are no where near as realistic or enjoyable as crashes in such games as Burnout.


What is great about the game though is the vast amounts of licensed cars they have managed to obtain. There's nothing like smashing up a fully licensed.

Dodge compared to something that vaguely resembles a car you've seen on the road. There are many cars to choose from once unlocked and all look and handle like the real things. They are also then available for selection in the quick race and multiplayer modes.

One feature I was hoping for from LA Rush, especially after hearing West Coast Customs were involved, was huge customisation options. I was thoroughly disappointed. I saved up the money required to pimp my ride and headed over to West Coast, looking forward to adding a hot body kit or exhaust to my car. However when the money was paid the car enters the garage and comes out seconds later with an auto pimp! I was annoyed about this as customising the cars was what I would have thought to have been a big part of LA Rush, therefore its success, but it was almost non existent.

Overall the game is well made with fantastic cut scenes, good racing and a fairly decent storyline taking you through the depths of LA. The inclusions of popular West Coast team members and the hip hop rapper 'Twista' in the cut scenes is a good aspect to the game and makes it stand out from similar games. On the other hand you can do better than LA Rush for racing, hardcore wipe outs (Burnout), customisation (Need for Speed) and area to explore (GTA). However none combine these features in such a tempting package. If you're looking for a multi function racing game, look no further, but if you're looking for a great high speed racing game or tons of customisation options you could do better.