Bond is back, retro stylee. From Russia with Love follows a very similar path to that of the original motion picture. The missions are chronologically in sync with scenes from the film but with artistic license adding a few extra missions to add to the experience. There are fourteen regular missions to complete at three different difficulty settings, whilst four unlockable bonus missions can be unlocked by accruing points from previously completed missions. The missions follow similar paths to previous Bond excursions such as just surviving onslaughts, rescuing the latest damsel in distress, racing through the streets/waterways/air or defusing bombs in set time limits. FRWL features the likeness, voice and acting talents of the Bond at the time â Sir Sean Connery. Mr Connery re-voices lines from the original score in his usual Scottish twang whilst lines from the likes of Q, M, Moneypenny and the agents of Spectre are plucked directly from the original dialogue. This is a respectable job of making FRWL feel like an original outing rather than a tired film-based rework, the title's overall design follows a tried and tested framework, so there are few surprises and no aspect is trend setting. 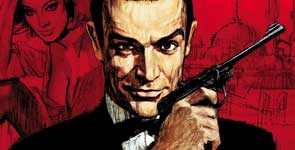 Shooting takes a while to get used to as you aim with L1 and shoot with R1, whilst other manoeuvrability includes the abilities to back up against walls, blow up canisters, use your watch laser through glass panels, roll, duck and sneak up behind enemies and quietly pistol whip them into unconsciousness. The first task incorporates the jetpack mission that circles around Big Ben that many will have seen in advertisements for the game. The jetpack itself is a welcome addition which enhances the 3D element to the game. The sceptic may question whether this technology was knocking around in 1963 but ignore them.

As you advance through the game and accrue points you also have the potential to upgrade your weapons. You can be rewarded with points for anything from finishing a mission quickly and as intact as possible to searching through desks and draws and finding dossiers and information that may interest a 00 spy. There are more than enough items to upgrade which include nine weapons and five gadgets and as already mentioned, new levels wait to be unlocked. The AI of your enemies is not over-impressive and it will take a whole screen of them piling in to unnerve you too much and this does not happen that often. However the multiplayer option first enjoyed in Goldeneye on the N64 is back equipped with its usual array of games; from Capture the Flag to Death-match. The graphics are neat, tidy and above average with the features of the young Sean Connery being captured impressively, while the sound has been put together efficiently with additions from the original movie music score.

This is an enjoyable outing for Bond but I feel the synergy that the game has to have with the movie restricts the missions somewhat and just gives you the feeling that many of the missions could have been so much better than what they are. The multiplayer option is always fun but the game itself suffers from the lack of a Co-op option. This is an enjoyable game in its own right but offers nothing new. It could be argued that it gives an air of corporate greediness milking the Bond franchise whilst offering no new gaming features whilst being released just before Christmas, but nobody is that cynical are they?